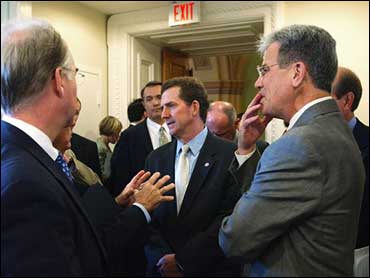 (AP Photo/Dennis Cook)
Republican Sen. Jim DeMint refused to back down from comments last week in which he said a White House defeat on health care reform would be President Obama's "Waterloo."

"If we're able to stop Obama on this, it will be his Waterloo. It will break him," the South Carolina Republican, pictured center, was quoted last week as telling fellow conservatives.

Waterloo is a reference to French Emperor Napoleon's final defeat in 1815 at the hands of a British-led coalition, before finally being sent into permanent exile.

In an appearance on NBC's "Today" show Wednesday, DeMint said it was time to "put the brakes on" Mr. Obama's plans, which he said would result in too much government sending and soaring deficits.

"It's not personal. We've got to stop his politics," he said.

DeMint acknowledged the need for reform but said it would be a mistake to rush legislation through Congress by the President's August deadline.

Congressional skepticism isn't just limited to Republicans either. The Blue Dogs, a group of conservative Democrats, have also voiced concerns about the costs of the plan under House consideration.

With opposition stiffening and public support waning, Mr. Obama may not be able to get a bill on his desk before the Congressional recess in August. The president's scheduled to give his 5th news conference Wednesday night in hopes of jumpstarting the process.