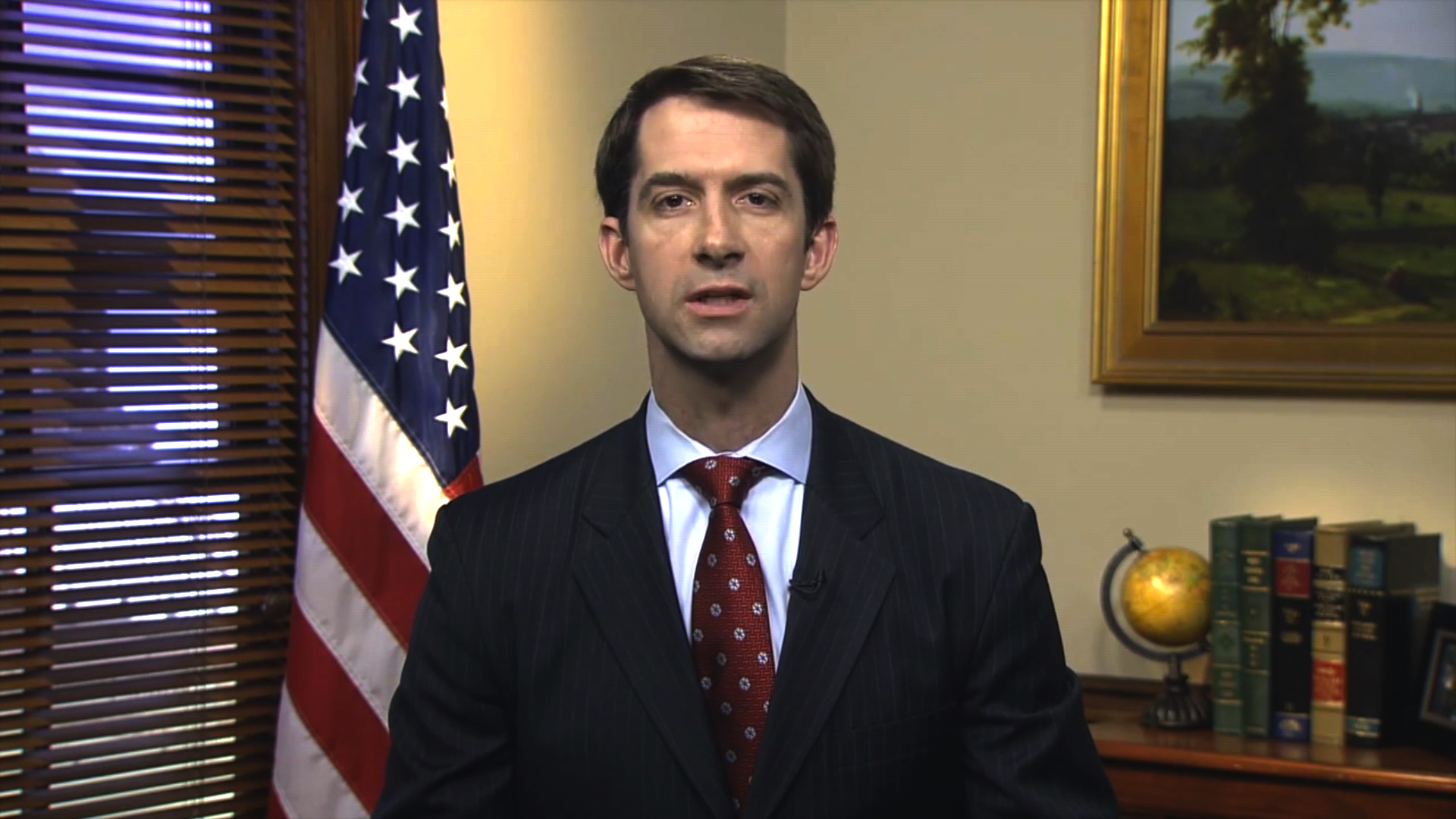 "We live in a dangerous world, and the dangers are ever increasing, particularly from radical Islamic terror," Cotton said in a video released Saturday. "But President Obama wants us to 'chill out.' He believes overreaction to terrorism is a graver threat than terrorism itself. He minimizes the threat of terror attacks, even as these savages cut off the heads of Americans and inspire or direct radicals to blow themselves up in public places."

The Arkansas Republican, frequently ranked as one of the most conservative members of the Senate, slammed the president for his actions following the attacks in Brussels last month. Mr. Obama, on a historic visit to Cuba in March, did not immediately return to the U.S. -- instead, the president followed through with plans he had made to attend a baseball game in Havana.

"President Obama went to a baseball game and did the Wave with Cuba's dictator even as Americans were missing and murdered in the Brussels attack," Cotton said. "The president's job is to keep America safe, and that requires leading from the front, not sitting in the stands."

"These aren't communication mistakes by the president," the Arkansas senator added. "They're a feature, not a bug, of his foreign policy."

Criticizing the Iran nuclear deal as yet another mistake of the president's failed international policies, Cotton promised that the Republican Congress will work to negate some of the deal's key features, like the lifting of economic sanctions against the Middle East power.

During an interview with Fox News last week, the president responded to similar accusations about his supposed downplaying of terrorism fears.

"In the wake of terrorist attacks, it has been my view consistently -- that the job of the terrorists, in their minds, is to induce panic, induce fear, get societies to change who they are," Mr. Obama told Fox News Sunday. "And what I've tried to communicate is, 'You can't change us. You can kill some of us, but we will hunt you down, and we will get you.' And in the meantime, just as we did in Boston, after the marathon bombing, we're going to go to a ballgame."

He also contended that "there isn't a president who's taken more terrorists off the field than me, over the last seven-and-a-half years."

In another video Saturday, the president touted his domestic policy accomplishments, particularly his administration's work in encouraging market competition.

"The deck should not be stacked in favor of the wealthiest individuals and the biggest corporations, against working Americans," Mr. Obama said. "In addition to enforcing the rules on the books, I've directed federal agencies to identify anti-competitive behavior in different industries, and find new and specific ways to promote competition."

The president signed an executive order earlier this week asking federal agencies to explore just that, with requirements for them to report back with their findings within 60 days. He pointed to the cable television industry as a mascot for the White House's broader efforts.

"My administration has encouraged the FCC to remove the barriers to competition that prevent new players from offering innovative cable box options to consumers," Mr. Obama said.

"The bottom line is, competition is good for consumers, workers, businesses, and our economy," the president added. "So I'm going to keep doing everything I can to make sure that our free market works for everyone."