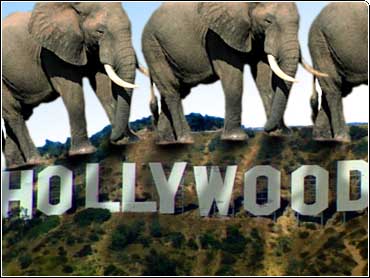 The drought appears to be over in Southern California, at least for Republicans running for president, CBS News Producer Theresa Bujnoch reports.

So far, Hollywood has poured $488,327 into George W. Bush's coffers. That's almost as much as Bill Clinton received from the entertainment industry during his entire 1995-96 campaign. For his part, GOP contender John McCain has amassed almost as much as Clinton's '96 opponent, Bob Dole - and the primaries haven't even begun yet.

The figures come from the nonpartisan Center for Responsive Politics, which tracked contributions from donors who listed their occupation in the television, film and music industries.

So does this mean Hollywood's swingers are swinging to the right?

Conservative author and activist David Horowitz of Los Angeles says that despite Hollywood's liberal reputation, "There are and have been Republicans [contributing money] but the comfort level has been raised by the star appeal of Bush and McCain. And Hollywood is all about style."

Horowitz insists giving would be even higher if not for what he calls a Hollywood "gay list" that intimidates conservatives.

"You have to have serious spine to identify yourself as a Republican," he says.

Apparently, there are more such people around in glitter gulch. A crowded Bush fund-raiser last June at LA's Century Plaza hotel brought in whopping $2.3 million dollars, much of it from Hollywood types.

Bush's candidacy is proving to be more palatable in a state that hasn't been contested in presidential terms since the late 80's, when Reagan left the White House. The Texas Governor said last summer that Republican nominees in the past (including his father) didn't compete hard enough in California. And he vowed not to write it off.

For their part, California Democrats say it's the message -- not the messenger -- that matters to voters here. And the GOP's record on abortion, gay rights and the environment doesn't site right with California's social liberals.

"Hollywood is not very sympathetic to people who are intolerant," says Bob Mulholland of California Democratic Party. He said the party is unfazed by Bush's fundraising success in Hollywood, which amounts to a tiny fraction of his $67 million campaign coffer.

"It's a drop in the bucket. Bush has raised twice as much money as anybody. What's the surprise there?" says Mulholland.

In fact, Bush leads the pack in contributions from almost every industry, according to the Center for Responsive Politics. His biggest contributors are from the fields of law ($4 million), real estate ($2.8 million), investment ($2.6 million) and the health, oil and gas industries. On a list of his top donors, the first media company ranks 64th.

Political Science Professor Jon Gould, of George Mason University, says the Hollywood money going to Bush comes primarily from studio executives who are "covering their bases," and not from high-profile entertainers.

All in all, Gould says, Hollywood is simply behaving like any other special interest group.

"I see this as a business move," he says.