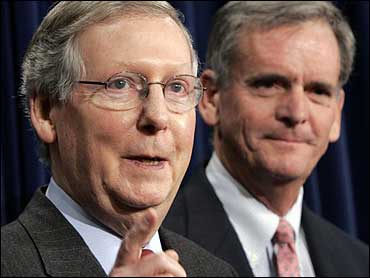 As the saying goes in Washington, when you're not on offense, you're on defense. This isn't so bad if you play good defense, as congressional Republicans and the White House have been doing. As a result the outlook for Republicans and conservatives isn't as bleak as it seemed right after last November's midterm election — and Democrats and liberals have found that enacting their agenda is far more complicated than they imagined when they captured Congress.

Democrats have themselves to blame, at least in part. They've tried to do the impossible: govern Washington from Capitol Hill. It never works. Republicans tried it after they won Congress in 1994, only to be thwarted by President Clinton in the climactic clash in 1995 over a government shutdown. They lost because they misread their mandate and overreached. Now Democrats are doing the same, particularly in their attempts to obstruct President Bush's counterinsurgency strategy in Iraq.

The message Democrats took from the 2006 election was that Americans want to clear out of Iraq as hastily as possible, whatever the consequences for Iraqis and the Middle East. So House Speaker Nancy Pelosi and her caucus got behind Representative John Murtha's strategy for micromanaging the war and draining Iraq of American troops. Victory? That's not in commander-in-chief Murtha's playbook. And once it became clear his scheme might endanger the troops in Iraq, moderate Democrats began to protest, as did an antiwar Republican, Walter Jones of North Carolina. Murtha became an albatross.

In the Senate, Democrats proposed a different tack: repeal or drastically weaken the resolution passed in October 2002 authorizing the war. A vote on this was urgent, Senate majority leader Harry Reid declared. But not so urgent that Democrats would permit a second vote on a resolution to continue funding the troops in Iraq. Democrats were wary of scrapping the option of cutting Iraq war funds, maybe later this year. But they feared being accused of not supporting the troops. This is when Senate Republican leader Mitch McConnell stepped in. He organized one filibuster, then another, that blocked the Senate from taking up the war issue unless Democrats also allowed a vote on the Republican funding resolution. Democrats were flummoxed and still haven't figured out how to proceed.

Meanwhile, the Bush administration moved ahead to deploy more troops in Iraq and begin the counterinsurgency campaign in Baghdad — a campaign that provides a realistic hope of pulling victory from the jaws of defeat. To justify their opposition, Democrats claim it's not a new strategy. They are factually wrong. Bush may have been slow in ordering a counterinsurgency drive, but it is new.

That leads us to domestic policy, where Democrats are again experiencing a thumping. Pelosi impressively drove six liberal measures through the House in the "100 hours" stunt in January, but all six are now bottled up in the Senate. Several will pass — a minimum wage hike, subsidies for energy research — but only with serious alterations by Senate Republicans. The most egregious of the bills, which would have injected government price-fixing in the Medicare prescription drug benefit, was dead on arrival in the Senate, thanks to McConnell.

Organized labor's agenda, pursued slavishly by Democrats, has met a similar fate. Even before "card check" — which would have allowed unions to organize without an election by secret ballot — cleared the House last week, McConnell had pulled together enough Republicans (more than 41) to filibuster and kill the legislation. House Republicans, while losing the vote, did a good job of painting the bill as unconscionable.

A second labor bill would have imposed collective bargaining on Transportation Security Administration (TSA) employees, and the Republican response demonstrated how Senate Republicans and the White House can perform as a political tag team. Senator Jim DeMint of South Carolina signed up 36 Republicans to oppose the TSA bill. Though short of the number needed to filibuster, it was sufficient to sustain a veto. The White House promptly said Bush would veto the bill.

What all this means is no secret. When Republicans stop feeling sorry for themselves, they can be effective. They can't get much of what they want. They're not on offense. But they are preventing Democrats from gutting the war effort in Iraq and from imposing on Americans a vast liberal program they didn't vote for. This is a worthy endeavor and Republicans are off to a good start.