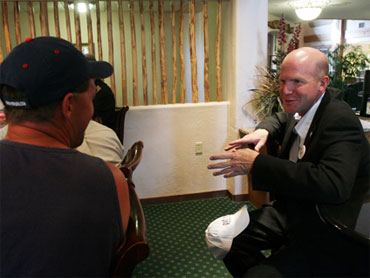 The Republican nominee for a northern New Mexico congressional seat suggested during a radio interview that the United States could place land mines along the Mexican border to secure the international boundary.

Asked Monday to clarify, Tom Mullins emphasized that he does not advocate doing so.

"I am not suggesting we do that," he told The Associated Press.

Mullins said border security came up during a radio interview last month, when he was campaigning for the GOP nod to run against Rep. Ben Ray Lujan, D-N.M.

During the May 18 interview with KNMX radio in Las Vegas, N.M., Mullins said the U.S. could mine the border, install barbed wire and post signs directing would-be border jumpers to cross legally at designated checkpoints.

"We could put land mines along the border. I know it sounds crazy. We could put up signs in 23 different languages if necessary," Mullins says in the radio interview, where he also expressed concern that terrorists could carry a nuclear weapon across the Mexican border.

He explained Monday the suggestion about land mines was something he'd heard while campaigning, and that it came in response to a complaint that nothing could be done to secure the border.

"When I heard it, I said, 'Well, that's an interesting concept,"' Mullins said.

As he did in the radio interview, Mullins went on to say the national laboratories could be directed to develop non-lethal detection equipment to improve border security.

"People are concerned about securing our borders," Mullins said. "We're hopeful we don't have additional terrorist attacks. They expect our central government to actually do something and not avoid the problem."

A spokesman for Lujan's campaign had no immediate comment.

"It was crazy. I probably got 20 calls that day. I'm still getting calls," Martinez said.

Mullins, a petroleum engineer from Farmington, is running in the 3rd Congressional District. The northern and eastern New Mexico district doesn't include any part of New Mexico's border with Mexico. The 2nd District in southern New Mexico has a 180-mile stretch of international border.