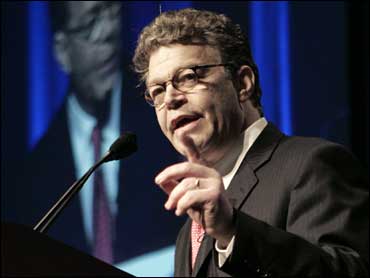 A top Senate Republican said Friday his caucus would block any attempt to seat the winner of Minnesota's close election until an anticipated court case is finished and an official election certificate is issued.

Minnesota's other senator, Democrat Amy Klobuchar, has said the man with the most votes after the recount concludes should be seated while legal matters play out. Franken hasn't discussed his intentions.

The new Congress convenes Tuesday. A court challenge and possible appeals could keep the Franken-Coleman contest unsettled for several months. Hundreds of uncounted absentee ballots are due to be opened and examined Saturday, and the Canvassing Board had hoped to wrap up its work by Tuesday.

Sen. John Cornyn of Texas, the incoming chairman of the National Republican Senatorial Committee, told reporters Friday that Republicans would object to seating anyone before the already lengthy process is finished.

"I can assure you that there will be no way people on our side of the aisle will agree to seat any senator provisionally or otherwise unless there is a valid election certificate and all legal issues about who got the most votes is finally decided," Cornyn said.

If even a single Republican were to object to a bid to seat Franken, Senate Democrats would have to come up with 60 votes to call the vote. Counting two independents who align with them, Democrats will have 58 or 59 seats in the incoming Senate, depending on the resolution of the Minnesota race.

Election officials around the state have spent the week conferring with campaign representatives about 1,350 sealed ballots that didn't get counted Nov. 4 but which may have been excluded in error. Under a Supreme Court order, all sides had to agree that an absentee ballot was incorrectly rejected before it could be forwarded to the state for counting.

Republican Gov. Tim Pawlenty said during his weekly radio show that the process may be flawed because the campaigns have so much power to keep ballots out.

"It seems odd that you would turn over somebody's legal right to vote to the campaigns," he said.
By Associated Press Writer Brian Bakst