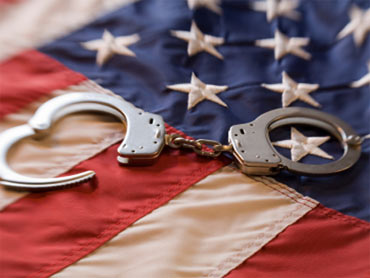 The Obama administration is facing harsh backlash from several lawmakers today after filing suit against the state of Arizona over its controversial immigration law.

The Justice Department today filed suit against the state's law, which makes it a state crime to be in the country illegally, arguing that it unconstitutionally usurps federal authority to enforce immigration laws. Republicans and some Democrats say that while immigration is a federal issue, Arizona should not be punished for acting in response to the federal government's failure to meet its responsibility.

Rep. Lamar Smith (R-Texas), the top Republican on the House Judiciary Committee, and 19 other Republicans in the House sent a letter to Attorney General Eric Holder today saying that the suit against Arizona's law "reflects the height of irresponsibility and arrogance."

"Arizona has taken a reasonable, constitutional approach to dealing with a problem that has been ignored by the Obama Administration," the letter says. "This lawsuit reveals the Obama Administration's contempt for immigration laws and the people of Arizona. It reveals contempt for the majority of the American people who support Arizona's efforts to reduce human smuggling, drug trafficking and illegal immigration."

Arizona's Republican Sens. Jon Kyl and John McCain said in a statement today it is "far too premature" for the administration to challenge the law, since it has yet to be enforced.

"Moreover, the American people must wonder whether the Obama Administration is really committed to securing the border when it sues a state that is simply trying to protect its people by enforcing immigration law," they said. "Attorney General Holder speaks of the 'federal government's responsibility' to enforce immigration laws; but what are the people of Arizona left to do when the federal government fails in its responsibility?"

The administration should not sue the state for taking action until the federal government has done everything in its power to protect people from violence and crime related to illegal immigration, Kyl and McCain said.

Added Senate Republican leader Mitch McConnell, "Suing the people of Arizona for attempting to do a job the federal government has utterly failed to execute will not help secure our borders. If the president wants to make real progress on this issue, he can do so by taking amnesty off the table and focus his efforts on border and interior security."

Democratic Rep. Harry Mitchell, a freshman representative facing a tough re-election campaign, said in a statement he was "extremely disappointed" by the administration's decision. (Read more about the 2010 elections here.) Mitchell said, "I strongly believe [the federal government's] time, efforts and resources should be focused on securing our border and fixing our broken immigration system."

Mitchell, along with his fellow Arizona Democratic Reps. Ann Kirkpatrick and Gabrielle Giffords, joined Republicans in denouncing the Obama administration's approach to immigration last week, following the president's address on the issue.

"Illegal immigration didn't occur overnight, and the situation cannot wait simply because folks choose to play politics," Mitchell said in his statement. "While the President acknowledged last week that Arizonans are justifiably fed up with inaction, filing a lawsuit is counterproductive to his statements of appealing to the American people's highest ideals to create a sensible and workable immigration policy. Arizonans are tired of the grandstanding."

The Justice Department today emphasized that some law enforcement officials from Arizona support the suit against the law.

"The impact of illegal immigration on Arizona's well-being cannot be denied," Tucson Chief of Police Roberto Villaseñor said in a statement. "But to require local police to act as immigration agents when a lack of local resources already makes enforcing criminal laws and ordinances a challenging proposition, is not realistic. Our community will suffer as a result, with a decrease in quality of life, and an increase in local mistrust of police."

The American Civil Liberties Union, which filed a separate suit against the law earlier this year with a coalition of civil rights groups, commended the Justice Department's actions.

"The administration's lawsuit is a cannon shot across the bow of other states that may be tempted to follow Arizona's misguided approach," Lucas Guttentag, director of the ACLU Immigrants' Rights Project, said in a statement. "We will continue to aggressively pursue our legal challenge and welcome the Justice Department's participation in the battle to preserve American values of fairness and equality."