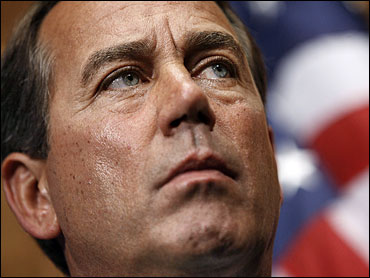 (Getty Images/Chip Somodevilla)
The Republican Party today has launched a counteroffensive to the controversial recent questioning over conservative radio host Rush Limbaugh's "leadership" of the party -- describe it as a White House diversion attempt.

"Political operatives in the White House are trying to divert attention away from the challenges facing our economy, the sinking stock market, and the irresponsible spending binge they are presiding over," the statement read. "In the midst of a deepening recession, White House staff should have higher priorities than this cynical strategy."

Boehner told reporters Wednesday, "The White House has created this big distraction…No one should be distracted right now."

On NBC's 'Today Show' this morning, Republican National Committee Chairman Michel Steele told Matt Lauer, "this is a great side-show distraction. You know, there's a lot of popcorn going around for folks who are watching this."

Steele avoided directly mentioning the controversy in his first several responses until Lauer asked bluntly, "It seems as though Mr. Limbaugh is taunting Republicans like you, though, saying, look, they all agree with me; they're just too gutless to say it. Does Rush Limbaugh put people like you in a very tough position?"

"Look, that's the nature of this job, baby," Steele said. "And along the way, my opponents, Democrats and even a few others out there, will try to mix us up and get us off track."

The controversy began last month when Limbaugh said he did not want President Obama's brand of politics to succeed.

He reiterated this sentiment last weekend at the Conservative Political Action Conference. "I want Barack Obama to fail if his mission is to restructure and reform this country so that capitalism and individual liberty are not its foundation?" Limbaugh said. "Why would I want that to succeed?"

White House Chief of Staff Rahm Emanuel and Press Secretary Robert Gibbs then started calling Limbaugh the true leader of the Republican party. He "is the voice and the intellectual force and energy behind the Republican Party," Emanuel said on CBS News' Face the Nation this past Sunday.

Over the weekend, Steele called Limbaugh, "an entertainer" whose comments can be "incendiary" and "ugly." But he then apologized within one day to the radio host.

During his daily briefing Tuesday, White House press secretary Robert Gibbs also added to the controversy. "I've encouraged members of the press to ask Republicans whether they agree with Mr. Limbaugh's adage that he hopes that the President's economic ideas fail. I was a little surprised at the speed in which Mr. Steele, the head of the RNC, apologized to the head of the Republican Party."

Limbaugh-gate has continued to fester since Sunday and it now seems that Republicans have decided to try to quell these potential intra-party fires.