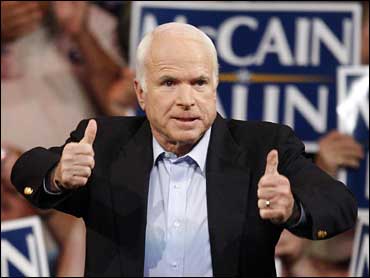 Four employees hired by a temporary staffing agency to encourage absentee voting for Republican presidential candidate John McCain say they were instructed to tell people they were GOP volunteers.

Kevin Kennedy, director of the state's Government Accountability Board, said he received complaints that the workers were told to mislead voters into believing they were volunteers. The complaints have been forwarded to local district attorneys, he said, but it's unclear whether the alleged deception would be a crime.

The employees told The Associated Press on Monday they were hired by Allstaff Labor Group to go door to door in the Milwaukee suburbs locating McCain supporters and distributing absentee ballot request forms. Allstaff recruited them under a contract with a consulting firm hired by the Republican Party of Wisconsin to run its absentee ballot program.

The workers claim they were told to say they were GOP volunteers even though they were getting paid $10 an hour. They were required to sign agreements stating they would not publicly discuss their work but said they decided to speak out because they were angry they had not been paid for the last few days. They claim they are owed between $200 and $300.

GOP spokeswoman Kirsten Kukowski confirmed there was a dispute over how many hours the employees worked and said the party's vendor was working to resolve it.

She said the workers spent three weeks distributing the forms to McCain supporters around the state. The program's managers were instructed to "accurately represent the program" to the workers, Kukowski said.

The paid employees, who were working at GOP offices alongside volunteers, may have picked up scripts intended for volunteers, she said.

"We did not instruct them to misrepresent themselves," Kukowski wrote in an e-mail.

The agency was only one of many hired by GOP consulting firm Lincoln Strategy Group to run the party's absentee ballot request distribution program.

"I told the Republican Party and Allstaff I wanted to know why we were lying to these residents," said Loyalty Dixon, 26, who worked in Waukesha for about two weeks. "I said, `Isn't that fraudulent?' They didn't give me a good explanation. They said, `You guys know you're getting paid. Don't worry about it."'

She recalled getting praised by people for being a McCain supporter. Some even asked whether she was getting paid, she said.

"We had to lie to these people and say we were volunteers," she said.

"They had us say, `I'm volunteering for the Republican Party of Wisconsin," said Marquis Mayes, 23. "I asked them, why would we say we were volunteers and we're not? They didn't have an answer for that."