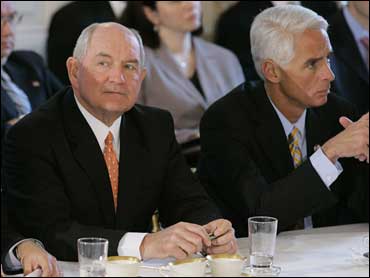 This story was written by Jeanne Cummings.


Fearing additional losses in 2008 among their own ranks, Republican governors are trying to wrest control of the party's re-branding campaign away from their Washington brethren.

The project is the brainchild of Georgia Gov. Sonny Perdue, who heads the Republican Governors Association. The way Perdue sees it, Washington Republicans haven't even coined the campaign properly.

"I want to dispel you of the notion that I call this a re-branding campaign," he said in a telephone interview. "I'm calling mine a 'Do what you say you are going to do' campaign."

Next month, a small group of governors spearheading the effort will gather in Atlanta to begin exploring new policy positions on energy, conservation, education and health care that they believe are more attuned with public concerns and doable at the legislative level.

The summit also will include a host of senior aides with expertise in policy, politics and communications who will be vital to translating the broad ideas into substantive legislative advances on the ground quickly.

The tug of war between the party's state and federal factions reflects continuing disagreement within the party about how to regain voter appeal and avoid another round of crushing Election Day losses. A recent NBC/Wall Street Journal poll showed Democrats have a 12-point advantage over Republicans when voters are asked their party preference.

Under the clamor of the presidential and congressional campaigns next year, there will be two open governors' seats up for grabs and nine other races involving incumbents, five of whom are Republicans. Last year, Democrats gained a majority of governorships, 28-22, after capturing six Republican seats and holding all of their own.

The governors' approach reflects the common theory that good policy makes for good politics. The effort is a more sophisticated version of the intraparty competition among Republican governors during the Clinton era that produced breakthroughs in welfare reform and led to the "compassionate conservative" rhetoric President Bush used in the 2000 presidential campaign to distance himself from the fiery partisanship of House Speaker Newt Gingrich and other Washington-based Republicans.

The statehouse push comes at the same time House Minority Leader John Boehner and the White House are maneuvering to create budget battles and other confrontations with the new Democratic majority to persuade voters they still deserve the conservative mantle.

Perdue nearly scoffs when asked if that's the right path the party should follow to recovery. "People don't want fights. They want people to solve problems with them. My simple philosophy is, people want good schools, safe streets, to feel protected and the opportunity for a good job. Then they want us to get out of their way. I believe that is a Republican message. I don't believe that message has been repudiated," he said.

He's hardly alone. At a summer's gathering with reporters in Washington, Minnesota Republican Gov. Tim Pawlenty seemed at a loss to explain how Republicans in Washington could still be quibbling over the reality of global warming when the party's governors, including Pawlenty and California's Arnold Schwarzenegger, were passing groundbreaking legislation to combat it.

"The false premise of some of the critics is that you'll wreck the economy," Pawlenty said, a shot aimed mostly at his own Republican colleagues.

The governors believe the party's donor base is banking on their efforts, as well. In the first six months of this year, the RGA raised more than $12 million - a million more than in the first half of 2006.

In contrast, national Republican coffers are experiencing a slowdown in donations. The RGA does have an edge, howeve. It can accept oversized corporate donations, whereas federal law bans such checks to national committees.

The seeds of the RGA project were planted soon after Perdue took over the association from presidential contender and former Massachusetts Gov. Mitt Romney at the group's annual meeting in Miami last year.

Outside the official conference meetings, the blame game was still raging over the association's inability in 2006 to hold its own despite a $10 million advantage over the Democratic Governors Association.

While some pointed at Romney's lopsided giving in early presidential primary states that were not highly competitive, an overarching consensus was that an anti-Republican backlash spawned by scandal, war and overspending in Washington took down the party's congressional majorities and also crippled its gubernatorial candidates.

So, as Romney used the gathering for some pre-presidential preening before the national media, Perdue began plotting a comeback strategy in smaller, quieter meetings. Among his allies: Texas Gov. Rick Perry, Mississippi Gov. Haley Barbour and South Carolina Gov. Mark Sanford. The goal: Use the RGA as an incubator of winning policy solutions, share those solutions with each other and lift the party's boat and image together.

Washington-based Republicans "aren't getting their ideas from Minnesota or Wisconsin. They are getting ideas from Nancy Pelosi, Harry Reid and MoveOn.org," said Nick Ayres, the RGA's executive director and a longtime adviser to Perdue. "Their idea of a strategy is to campaign on your opponents' greatest weakness."

Brian Kennedy, Boehner's spokesman, concedes that "Washington is and has been part of the problem for a long time, which is exactly why House Republicans started our effort to refocus on the party's core principles and to develop new, innovative solutions to the country's biggest challenges."

But he believes the House Republicans' thinking is closer to their governors' than the liberal left's. "Every Republican agrees that the best way to capture the hearts and minds of voters is to rise above the Beltway's partisan noise by communicating common-sense solutions that help working families. If the RGA is initiating a similar effort of its own, that's great."

To spice up the dialogue at the October meeting, Perdue has invited Gingrich, who has spent years mulling fixes for health care, and Republican polling expert and image guru Frank Luntz. In addition to the Georgia governor and South Carolina's Sanford, Missouri Gov. Matt Blunt and Florida Gov. Charlie Crist are expected to participate. Thirty-six senior staff members from 22 governors' offices, spanning from Alabama to California, will also be there.

But the lack of a national voice in the process could still prove a handicap for the governors' efforts.
A main reason the governor-initiated party refurbishing took hold in the late 1990s was that it was given voice in a 2000 primary field teeming with former and current residents of governors' mansions.

Bush won the primary, but not before national audiences were exposed to former Wisconsin Gov. Tommy Thompson and former Michigan Gov. John Engler and heard of their innovations in welfare and health care.

This cycle, the party primary is dominated by voices and issues generated by the Republicans' Washington wing.

Romney has all but abandoned what had been one of his signature legislative victories, an overhaul of health insurance coverage in Massachusetts that is now being adopted as a model for change by many of his former colleagues.

But the dominance of the Iraq war as a 2008 issue often drowns him out and thratens to do the same for all the Perdue-sought policy initiatives aimed at changing the party's image.