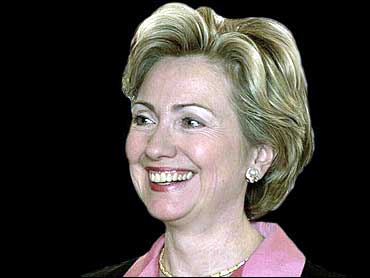 Democratic Sen. Hillary Rodham Clinton repeatedly insists she isn't running for president, but a new nationwide Republican effort aims to raise funds for the 2004 election by suggesting the GOP has to stop her.

"Are you ready for a new Clinton era in Washington?" the letter from the Republican Presidential Task Force begins. "It could happen. But only if you let it."

The appeal being sent this week continues: "If Republicans don't take immediate steps to counter her, Senator Hillary Clinton will continue to rise unimpeded to the very pinnacle of power in Washington and we will see the dawning of a new, more liberal Clinton era."

The three-page letter points out that the New York senator has said she will not run for president in 2004. Nevertheless, it focuses on Clinton's quick rise through the ranks of the Democratic Party since winning office in 2000, arguing that she has become her party's "top fund-raiser, their top ideologue, their leading voice in opposition to President Bush."

High polling numbers for Clinton among Democrats have fueled speculation about her plans, but she has repeatedly said she will not run in 2004.

Allen, who also serves as the chairman of the National Republican Senatorial Committee, writes that his group will launch "a new mission: To stop Hillary."

"Only with your support will we have the resources to battle the multimillions of dollars Hillary Clinton is raising from deep-pocketed liberals," the letter says.

Clinton's spokesman, Philippe Reines, said, "while their attention is flattering, Senator Clinton will continue working with her colleagues on both sides of the aisle to get things done for New York and America."

Clinton was the target of similar Republican fund-raising efforts in past elections, and one Republican operative familiar with the new appeal said she still energizes the Republican base as much as she does for the Democrats.

The senator, who is not up for re-election until 2006, also has been used as a fund-raising foil by a New York Republican looking to unseat Sen. Charles Schumer, D-N.Y., in 2004.

Michael Benjamin, a Wall Street trader seeking his party's nomination, has sent out a letter arguing a victory over Schumer would "set the foundation for defeating Hillary Clinton in 2006."