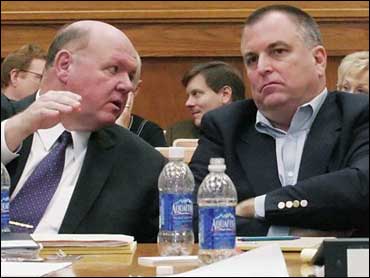 A former Republican fundraiser at the center of a scandal-plagued state investment in rare coins that helped Democrats seize power in the national midterm elections was sentenced Monday to 18 years in prison.

"You continued to spend the bureau's money at what I thought was a shockingly, alarmingly large rate, and done for one purpose: to present some type of a facade that you had a bottomless cup of wealth and luxury at your disposal, when in fact it was at the state's expense," Osowik said.

Noe declined to make a statement during the hearing.

Defense attorney John Mitchell urged Osowik before sentencing to consider that Noe is unlikely to repeat his crimes.

"I think it's important to consider that this was a one-time crime and set of circumstances that I think will never echo at any point in the history of this state again," Mitchell said.

Separately, Noe already has been sentenced to two years and three months in federal prison after pleading guilty earlier this year to funneling $45,000 to President Bush's re-election campaign.

The scandal surrounding the investment that Noe managed had dogged the state Republican Party for more than a year, culminating this month with Democrats winning a U.S. Senate seat and four of five statewide offices after 12 years of Republican rule.

The Ohio Bureau of Workers' Compensation gave Noe $25 million in 1998, followed by another $25 million in 2001 to invest in rare coins. Democrats charged that Noe got the money because of his ties with the Republican Party.

Defense attorneys during the trial insisted Noe had permission to invest the money and that the coin fund produced $7.9 million in profits over seven years.

Noe's former right-hand man testified that he borrowed rare coins and faked records with the approval of his boss. Timothy LaPointe, Noe's close friend, said they both intended to repay the money.

Ohio Attorney General Jim Petro last week said he will renew efforts through a lawsuit to seek at least $4 million that Petro charges Noe took from the coin investment for personal use.

Before the investigation began, Noe was a member of state boards that oversee the Ohio Turnpike and Ohio's public universities. He was a top Republican fundraiser who gave more than $105,000 — to Republicans including Mr. Bush and Taft in 2004.