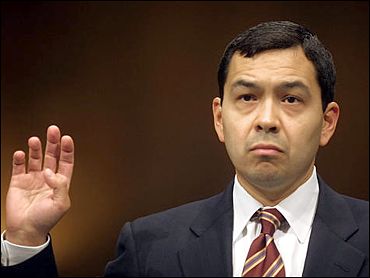 The 55-44 vote after four weeks of ethnic-tinged debate was five votes short of the 60 needed to end what had evolved into a Democractic filibuster against Estrada. President Bush nominated him two years ago to become the first Hispanic on the U.S. Court of Appeals for the District of Columbia.

Mr. Bush, in a statement released Thursday afternoon, vowed to stand by Estrada "until he is sworn in as a judge," and called on the Democratic leadership "to stop playing politics, and permit a vote on Miguel Estrada's nomination."

Senate Majority Leader Bill Frist, R-Tenn., said the GOP will try again later to break the filibuster but added that the Senate will turn to other business in the interim. GOP caucus chairman Rick Santorum of Pennsylvania said they would likely ask for another vote next week.

The Democrats sent a message, says CBS News Correspondent Bob Fuss, that the president can't run roughshod over them when it comes to judges. They say he is nominating only extreme conservatives, but some payback is also involved. President Clinton tried to appoint several judges to this same appeals court, but Republicans blocked them all.

The D.C. circuit — which decides important government cases involving separation of powers, the role of the federal government, the responsibilities of federal officials and the authority of federal agencies — currently has four Democratic appointees and four Republicans.

U.S. to outfit thousands of border agents with body cameras

Only one judicial nominee has ever been stopped through a Senate filibuster: the nomination of Supreme Court Justice Abe Fortas to be chief justice in 1968. President Lyndon B. Johnson withdrew the nomination after the Senate rejected cloture.

Republicans say they will not withdraw Estrada's nomination.

"If we need to, we will vote on cloture again and again," Frist said. "Let me be clear: the majority will press for an up and down vote on this nominee until Miguel Estrada is confirmed."

"The vote will not change regardless of how many votes are cast," Daschle said. "We feel strongly as a caucus and will continue to hold our position as a caucus."

Democratic Sen. Bob Graham of Florida, who is running for the Democratic presidential nomination, missed the vote.

Frist, R-Tenn., said forcing a vote — even an unsuccessful one — would make Democrats go on the record. Attempts to persuade Democrats to end the filibuster have failed, he said, but public pressure might make them change their minds.

"I have to rely on my only alternative now," Frist said Wednesday. "That is to generate a vote so that people in this body - and indeed, the American people — can know where each member stands."

Democrats have been getting pressure from conservative Hispanic groups to confirm Estrada, who would become the first Hispanic on the Washington, D.C., court. Republicans hope the battle over Estrada — a 41-year-old Honduran immigrant who graduated from Harvard Law School, served in the Justice Department during the Clinton administration and practices law — will help win Hispanic votes for their party.

Democrats insist they will not allow a final vote on Estrada until the Washington lawyer answers more of their questions in a public hearing or the White House releases Estrada's working papers from his time at the Justice Department solicitor general's office.

"We have simply asked that Mr. Estrada fill out his application for this lifetime employment as every other one of his predecessors has," Daschle said Wednesday.

The White House refuses to release the information or provide Estrada for another public hearing. Instead, it has offered to make Estrada available for private meetings with senators and have suggested Democrats talk to Estrada's past employers.

Hispanics are the nation's largest minority, at 37 million, and make up 13 percent of the U.S. population, Census Bureau estimates showed in January.

Many Democrats reject claims that the Estrada battle would cost them votes, saying they support policies on education, immigration and other issues that Hispanics favor.