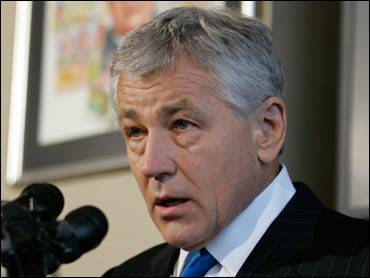 A string of political setbacks has damaged Republicans' hopes of regaining the Senate majority next year and increased the likelihood Democrats might expand their razor-thin margin.

The 2008 campaign appears increasingly unpleasant for Republicans a year after unexpected defeats cost them control. Among the factors are GOP retirements in toss-up states, voters' distress over the Iraq war and a handful of scandals.

The latest blow comes from Nebraska Sen. Chuck Hagel, who announced Monday that he would not seek a third term.

"I said after I was elected in 1996 that 12 years in the Senate would probably be enough, and it is," Hagel said.

He would have been favored heavily to win again. Democrats now hope that Bob Kerrey, a former governor and senator, will run and claim the seat. But Republican Mike Johanns, the U.S. agriculture secretary and another former governor, and State Attorney General Jon Bruning are also strong contenders and could keep the seat in Republican hands.

Just recently, Sen. John Warner, R-Va., said he would give up his seat, which Democrats now considerable winnable.

Republicans once had higher hopes of reversing their 2006 setbacks, when they lost virtually every close contest and saw their 55-45 majority disappear. Now it is Democrats who feel energized, hoping to pad their majority that is essentially 51-49, when the voting patterns of two independent senators are considered.

Ethics have hurt the GOP's image -- sex-related scandals involving Sens. Larry Craig of Idaho and David Vitter of Louisiana, a federal raid of Sen. Ted Stevens' Alaska home in a bribery investigation. Also, the Senate ethics committee is looking into claims that Sen. Pete Domenici, R-N.M., tried to pressure a federal prosecutor in an election probe of Democrats.

Of those, only Vitter's seat is not up for re-election. Even if Democratic victories are unlikely in the Republican strongholds of Alaska and Idaho, the scandals are a distraction that could drain money and energy the party would prefer to focus elsewhere.

Democrats "have reason to feel good," acknowledged Sen. John Ensign, R-Nev., who heads the GOP's Senate campaign committee. But, he said in an interview, Republican candidates will perform better than many people expect.

Republicans note that Democratic senators are seeking re-election in contested states such as Louisiana, Montana, Arkansas, South Dakota and Iowa. But Republicans have recruited poorly in some of those states, and Sen. Mary Landrieu, D-La., is the only incumbent that Ensign named as a potential election victim.

Democrats note that Landrieu disproved similar talk in 1996 and 2002.

The congressional elections are 14 months away, presidential campaigns will overshadow them and much can change. But Democrats are smiling, for now at least.

Warner's decision against a sixth term is perhaps the biggest gift because he is enduringly popular in a state trending Democratic. Democrats want former Gov. Mark Warner to run, although he would have to drop his vice presidential hopes to do so.

In Nebraska, Hagel's departure gives Democrats high hopes. But Agriculture Secretary Mike Johanns, a popular Republican former governor, would be formidable against even a well-known Democrat such as Kerrey, political insiders say.

Among other closely watched races: