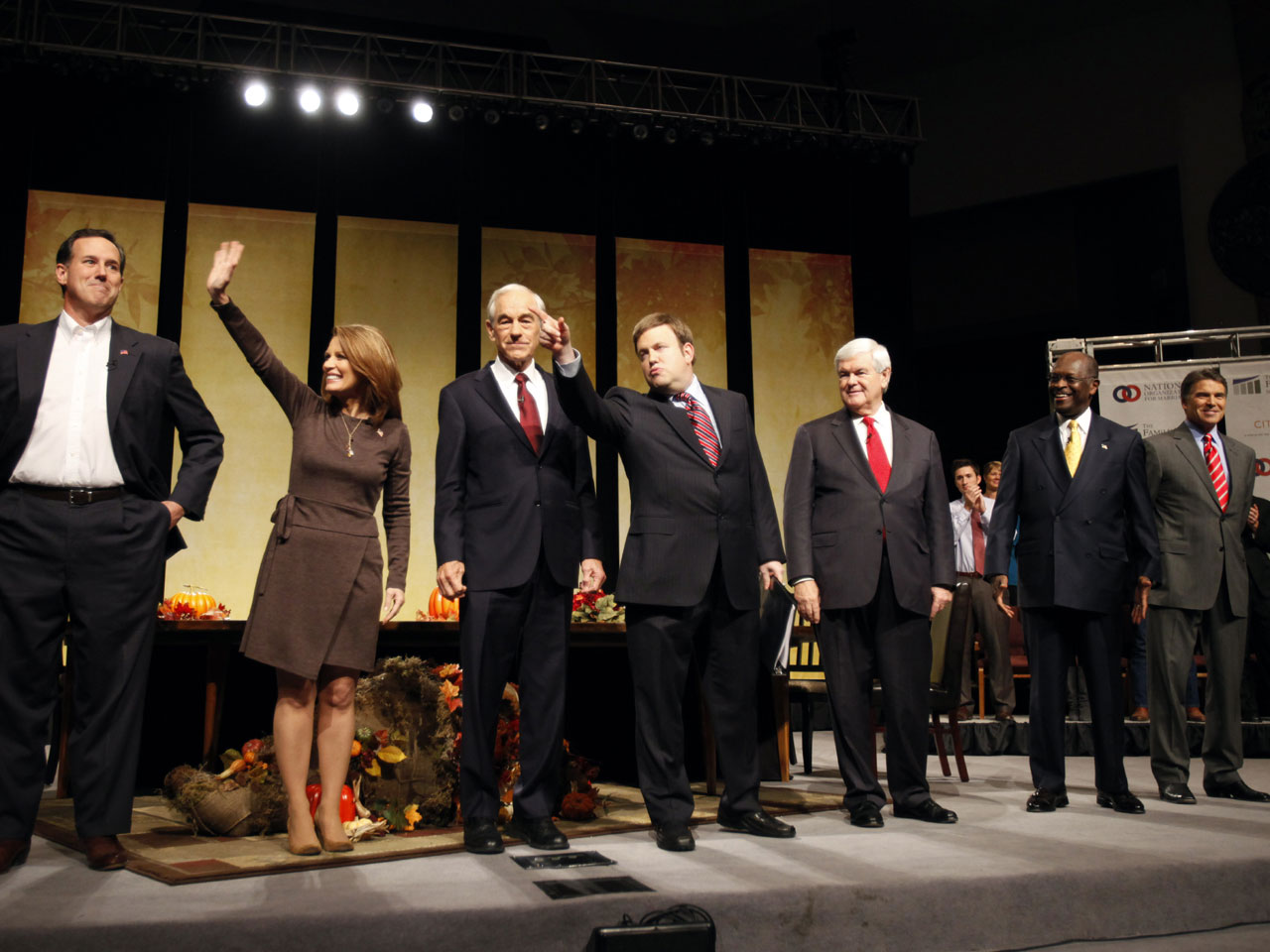 DES MOINES, Iowa - There was plenty of good will and a few tears as six Republican presidential rivals gathered here Saturday afternoon for a forum in which they agreed more than they debated the role of government and religion in society before an audience of evangelical activists.

The "Thanksgiving table forum" was hosted by the Family Leader, a Christian organization that encourages its members to consider their religious views in political decisions. Neither Mitt Romney nor Jon Huntsman, the two Mormons in the race, attended.

The first hour featured questions about hot-button conservative issues, and prompted a discussion among candidates about whether more religious citizens in the country have been marginalized.

"Those of us that are people of faith and strong faith have allowed the non-faith element to intimidate us into not fighting back," Cain told the audience of about 2,500 in a West Des Moines church. Texas Gov. Rick Perry bemoaned a law that limits political speech from the pulpit, saying pastors needed to be talking about conservative values in church. "And let me tell you: it needs to be our values," the he said. Agreed Rep. Michele Bachmann, R-Minn.: "That's not the American way."

That prompted the candidates to make a collective argument for getting the federal government out of education and allowing discussion of religion in schools. Leading that discussion was former House Speaker Newt Gingrich, who captured the first rounds of applause of the night and was a consistent favorite with the crowd.

Asked about what value he would most like to re-instill in America, Gingrich said, "I think it would be that every American understood that we were endowed by our creator with certain inalienable rights, and I wouldn't have anybody teaching who felt uncomfortable explaining what the Founding Fathers meant."

Despite the candidates' devotion to the 10th Amendment, upholding states' rights, nearly all came out in favor of federal laws or constitutional amendments outlawing abortion and defining marriage as the union of one man and one woman.

"When you look at issues like traditional marriage, when you look at issues like the human life amendment, the president of the United States can lead on those issues, can publicly proclaim support and go campaign across the country to get states to support those positions," Perry said. "That is the virtuous direction that the next president of the United States needs to powerfully go down."

The notable exception was Texas Rep. Ron Paul, who said he would leave the definition of marriage to the states in accordance with the Constitution. He went one step further, though, suggesting the entire institution would be best left to the church.

"I think the reason we fight and feud over this is because we have too much government everywhere," Paul said. "I would say the church should make this decision."

The talk about states' rights turned to civil rights at one point when forum moderator Frank Luntz, a conservative pollster, asked Cain whether states had the right to say 'no' to Washington's attempts to legislate on moral issues - such as segregation in the South in the earlier part of the 20th century.

The Founding Fathers, "set the bar high," Cain said. "They didn't set it where they were, they set the bar high hoping that this nation would aspire up to that level and that's the journey we have been on since the beginning of this nation," he said. Cain acknowledged that the federal government had the right to interfere with state law on that occasion because his state was "wrong."

Although the candidates were in agreement for much of the night - and the tone was that of a group of friendly colleagues - Santorum at times angled for votes from the evangelical audience by saying he had done more to fight for the issues that were so important to them.

"That's the difference between me and everybody else out here," he said during a discussion of what the candidates would do to protect life. "You make the assumption that the Supreme Court's going to overturn Roe v. Wade. I'm not going to wait," Santorum said. He touted his efforts last year in the campaign to oust three Iowa Supreme Court justices who had ruled in favor of same-sex marriage.

The second part of the night featured Luntz asking candidates to share personal stories and challenges. Cain choked up and almost couldn't finish a story about being diagnosed with cancer and having his wife tell him, "we can do this." Santorum got misty-eyed when he talked about the struggles facing his young daughter, Isabella, who was born with Trisomy 18.

There was compassion among the rivals. Perry reached out to comfort both men, who flanked him, as they told their stories.

"I feel like Dr. Phil," said Luntz, referring to the TV psychologist.

Before the event, Family Leader CEO Bob Vander Plaats stressed that the goal of the forum was not just to elicit the candidates' positions on certain issues, but to also elucidate why the believe what they do.

That goal was shared by moderator Luntz, who told crowd he wanted them to "understand [the candidates'] worldview."

"There's a reason Iowa goes first," Luntz said, "and it's because of you."