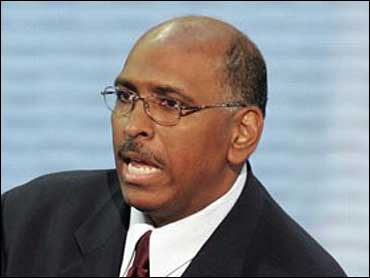 (AP)
Republican National Committee chair Michael Steele is once again in the news after suggesting in an interview with GQ that he believes abortion should be "an individual choice."

Steele added that pro-abortion rights advocates "absolutely" have a place in the "big-tent" GOP. He also told the magazine that Roe v. Wade was "a wrongly decided matter" and that states should set their own abortion policies.

After the interview came out, Steele emailed a statement insisting that he is "pro-life, always have been, always will be."

He suggested that in the interview he was trying "to present why I am pro life while recognizing that my mother had a 'choice' before deciding to put me up for adoption."

"…the Republican Party is and will continue to be the party of life," he added. "I support our platform and its call for a Human Life Amendment."

The statement did not satisfy Steele's conservative critics.

"For Chairman Steele to even infer that taking a life is totally left up to the individual is not only a reversal of Republican policy and principle, but it's a violation of the most basic of human rights–the right to life, liberty, and the pursuit of happiness," former GOP presidential candidate Mike Huckabee said of the comments. "His statement today helps, but doesn't explain why he would ever say what he did in the first place."

"Michael Steele has just unmistakably proclaimed himself to be pro-choice," anti-abortion activist Jill Stanek said in an email to Politico. "You thought he was 'embattled' last week over his Limbaugh comment? Ha. He has now stepped both feet into it." Charmaine Yoest of Americans United for Life Action, meanwhile, characterized the remarks as "language straight out of Planned Parenthood's messaging playbook."

Even by the standards of someone who has had a rocky tenure in his new job, Steele has had a rough week: In addition to taking heat for his comments on abortion, he also faced rumors that Katon Dawson, who finished second to Steele in RNC chair voting, was agitating for a no-confidence vote against him at the end of the month.

Dawson, who is meeting with Steele privately today, denied the claim, but as the Washington Post wrote, "the fact that [the rumor] started at all is evidence of the unhappiness directed at Steele in some quarters of the party."

Steele was the most moderate candidate in a crowded field for the GOP chairmanship, and his abortion comments will fuel fears among conservative Republicans that their chair is too far to the left on a number of issues, abortion chief among them.

Unlike past party chairs, Steele has made himself a very public face for the Republican Party, and his forays into the public realm have not always been successful: Steele was mocked for saying the GOP needs a "hip-hop makeover" and criticized both for calling far-right talk show host Rush Limbaugh's rhetoric "incendiary" and for apologizing later for having done so.

His comments and missteps have led to news stories in which anonymous powerful Republicans have complained that Steele is not capable of handling his job leading the RNC.

In the GQ interview, Steele also said that homosexuality is not a choice – hardly a universal position among members of his party.

Hotsheet would encourage you to check out the entire GQ interview, which opens with Steele uttering the words "Aw, sh—" after the interviewer said she expected him to be playing hip-hop in his office.