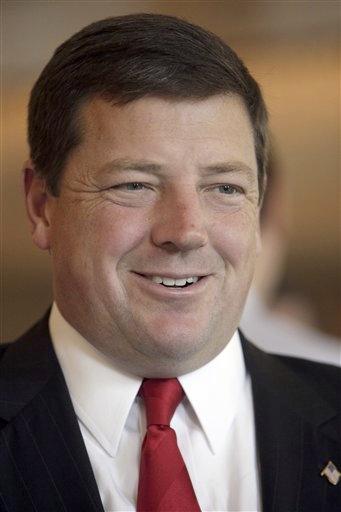 Martin immediately sought to link McCaskill to President Barack Obama, decrying her support for the economic stimulus act and the health care overhaul and suggesting in a newsletter to supporters that their "ObamaClaire" policies were growing government.

The election in "2012 will be about a very simple question - that is what should the size and scope and cost of the fed government be?" Martin told The Associated Press. "Sen. McCaskill decided along with President Obama that bigger and stronger and more costly is better."

A historical swing state, Missouri is expected to feature one of the nation's more closely contested U.S. Senate races next year. McCaskill has cut a high profile in her first term, leading subcommittee investigations into government contracting and breaking with Democratic Senate leaders as an outspoken critic of earmarks.

But many Republicans view McCaskill as politically vulnerable because of her early and continued support of Obama, whose popularity waned in Missouri after he narrowly lost the state to Republican Sen. John McCain in the 2008 elections.

Former Republican Missouri Treasurer Sarah Steelman declared Dec. 1 that she would challenge McCaskill, making her's one of the earliest entries nationally into the 2012 campaigns.

"I am running to fight for Missouri families who want less government and more freedom," Steelman said in a written response to Martin's announcement. "I remain focused on running against Senators Claire McCaskill and Harry Reid's control of the U.S. Senate."

U.S. Rep. Sam Graves, of northwest Missouri, has said he will decide this week about a Senate bid. Other Republicans considering the race include U.S. Rep. Jo Ann Emerson of southeast Missouri and Ann Wagner, a St. Louis party activist who is a former chairwoman of the Missouri Republican Party, co-chairwoman of the Republican National Committee and an ambassador to Luxembourg during President George W. Bush's administration.

Martin, 40, of St. Louis, made a name for himself last year by nearly upsetting Democratic U.S. Rep. Russ Carnahan in a traditionally strong Democratic district in the St. Louis area. Martin earned a reputation as a relentless campaigner, posted strong fundraising figures, made effective use of social media and drew support from tea party activists with his conservative message.

In a video posted on his Facebook page Monday, Martin criticized reckless spending in Washington, D.C, and pledged to support a federal constitutional amendment requiring a balanced budget.

Before his congressional candidacy, Martin was best known as the sometimes brash chief of staff for former Missouri Gov. Matt Blunt. He left Blunt's office after a little more than a year, as controversy built over Martin's firing of legal counsel Scott Eckersley, who claimed the governor's office was not following Missouri's open-records law.

Eckersley filed a wrongful termination and defamation suit and eventually was paid $500,000 in a state settlement in which no parties admitted wrongdoing. The state's legal fees exceeded $1.6 million. Eckersley later used some of that settlement money to run for unsuccessfully for Congress last year as a Democrat.

Martin previously worked for the Roman Catholic Archdiocese of St. Louis, as an attorney for anti-abortion and school-choice groups and as chairman of the St. Louis Board of Election Commissioners. In 2008, he led an unsuccessful Internet-based effort to stop the sale of the St. Louis-based brewery Anheuser-Busch to InBev, based in Belgium.