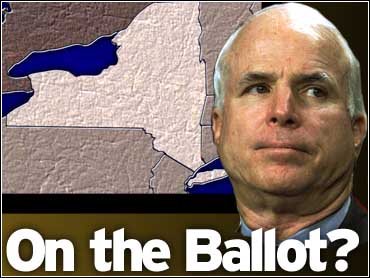 The New York state Republican party started it by challenging GOP presidential hopeful John McCain's presence on state ballots. Now McCain, after an unlikely detour in which Democrats tried to aid him, is fighting back in federal court. Meanwhile, Steve Forbes has entered the fray, joining McCain's lawsuit and striking back at GOP front-runner George W. Bush.

Just weeks from the state's critically important primary, the ballot battle is by all accounts a long way from resolution.

Tensions boiled over Thursday night when a state Supreme Court judge rejected an unusual decision by Democrats on the Board of Elections which would have preserved McCain's presence in eight contested districts. Republicans needed the Democrats to go along, but in a breach of partisan etiquette, they refused. McCain was only saved briefly, however, because the GOP's challenge in state court was upheld.

When the anti-McCain forces won the day, the Arizona senator said that it was "disturbing that he could be taken off the New York primary ballot in the freest country in the world."

McCain said he would take his fight to the floor of the GOP convention if necessary.

That may not be necessary, depending upon a federal court decision expected soon. A judge in Brooklyn is expected to rule on the state's election and ballot laws generally. And on Friday, millionaire Steve Forbes also decided to intervene, joining McCain's lawsuit.

Paul Sullivan, Forbes' attorney, said his client has been struck from the ballot in three congressional districts because of technical violations of the state election laws. Like McCain, the Forbes campaign believes that Bush supporters are behind the move.

"I think it's a clearly politically motivated attempt to strike us from the ballot with some of the most arcane technicalities in the New York ballot access statutes," Sullivan said.

The issue has simmered for years in New York, with many politicians - especially in the GOP - saying that the party chiefs have total control over who gets on the ballot. And this time around, party leaders are backing Bush.

Staten Island Borough President Guy Molinari, who is running McCain's campaign in New York, told CBSNews.com this week that the attack on McCain is "outrageous," and ultimately will hurt Bush here.

But New York GOP General Counsel Jeff Buley said the laws were written to force political hopefuls to run a "good, grassroots campaign." Buley said McCain has not done that.

McCain, who has called the challenge "Stalinist," says Bush should call fellow Gov. George Pataki of New York and tell him to let him on the ballot.

New York's March 7 presidential primary is seen as a critical test. It's earlier than ever and it's big state. But if McCain fails to get on eight of the state's 31 balloting districts, his chances will be severely hindered.