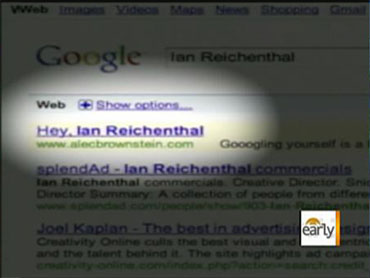 With the national unemployment rate hovering around 10 percent, job seekers are looking for creative ways to gain a competitive edge in the hunt for work.

Former job seeker Alec Brownstein relied on the vanity of a few ad execs, hoping they would stumble upon his resume while searching for themselves online.

He bought ad space on Google to get his online resume into the right hands.

Well, it worked. Ian Reichenthal, creative director at Young and Rubicam, an ad agency in New York City, was a part of the ad campaign. He Googled himself, found Alec's ad, and hired him after calling him in for an interview.

Brownstein explained to "Early Show" co-anchor Harry Smith he wasn't out of a job - he was just looking for somewhere different to work -- with specific people, whose names he knew.

So how did he stumble upon the idea?

Brownstein said, "I was doing a little bit of research on who I wanted to work for, and of course I was using Google, and I noticed when I Googled their names, that there were no sponsored links at the top, no ads there."

He added, "And as someone who Googles myself sort of embarrassingly frequently, I realized if someone were to put someone at the top of my result, I would notice it."

Brownstein explained when buying ads on Google, the price of the ad goes up the more well-known the individual or company or organization is. However, often, when you're buying an individual's name, it's usually much less.
He said he bought the top result for "Ian Reichenthal" for just 15 cents.

Smith remarked, "And you bust through the entire bureaucracy and your resume is like right on his desk."

Brownstein replied, "Well, you know, that was the hope."

His hope paid off when one day Reichenthal Googled his name and found Brownstein's portfolio. Reichenthal explained he got word of the advertisement when friend of his sent him an e-mail telling him about Brownstein's ad at the top of the results list.

Reichenthal said, "I thought it was great. It was so unusual and fun and just really simple. A simple idea. That's just the kind of ideas we're looking for."

But the ad link wasn't all the company liked about Brownstein.

"He's got a great portfolio, too," Reichenthal said. "So it wasn't just the Google ad. His work is great."

Brownstein has been with the company for a few months, but Reichenthal added expectations are now high for the creative campaigner.