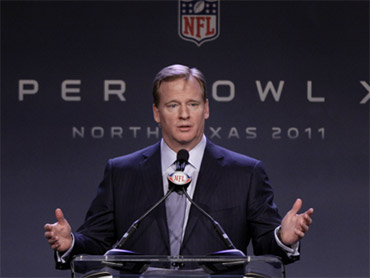 DALLAS - Chad Ochocinco asked NFL Commissioner Roger Goodell the question all his fellow players want answered: How far away are we from realistically getting a labor deal done?

Goodell hopes it can be done "in the next few weeks," meaning before the collective bargaining agreement expires March 3.

"I can tell you the commitment on behalf of the ownership is on getting an agreement," Goodell said. "I think that's only going to happen when there's intense negotiations from your union and the owners. This is the window of opportunity to get this done right. Otherwise, uncertainty is going to seep into all of our operations. ... I say, let's get to work, let's get an agreement that works for everybody."

Goodell and union officials are scheduled to meet Saturday in the Dallas-Fort Worth area, the first formal bargaining session since November. Two more sessions have been scheduled for next week, at an undisclosed location.

NFLPA spokesman George Atallah described the meeting as "a window of opportunity" and added: "We intend to go in there with open minds and open ears."

"I don't think it's a good idea to set any expectation, other than the fact that we intend to sit down and continue to have a discussion that should guarantee football for our fans, football for our players," NFLPA executive director DeMaurice Smith said Thursday.

"I can assure you that I have that sense of urgency," Goodell said. "There are enough incentives for all of us to get to the table and get a deal done."

Extending the regular season by two games to 18 is among the major issues. However, Goodell said "there are no deal-breakers."

The main issues between the owners and players union include how to divide about $9 billion in annual revenues; the owners' push to expand the regular season to 18 games; a rookie wage scale; and benefits for retired players.

A lockout is widely expected, although Goodell said owners are only "committed to a deal that works and is fair to the clubs."

"Status quo is not acceptable," he said. "We have to address these issues going forward. ... The pendulum has shifted too far in one direction."

He called the union's request for teams to open up their financial records a negotiating ploy, and said a brewing dustup over whether teams can name franchise players could be headed to court.

Goodell said a work stoppage of any length would draw backlash from fans and sponsors. He noted that would hurt everyone because "when that revenue decreases, there is less for us to share."

He knows his reputation would take a hit - as would his paycheck. He's vowed to let his salary plummet from nearly $10 million, including bonuses, to $1.

Goodell also said he has spoken to Eagles quarterback Michael Vick three times in the last two weeks. Vick was reinstated during the 2009 season after spending 18 months in prison on federal charges of running a dogfighting ring.

Vick's name has been attached to several events that don't fit the rehabilitated image he's trying to cultivate. Goodell said Vick told him others were using his name without permission.

"I don't want him to put himself in a position where bad things can happen around him," Goodell said. "He takes that seriously."

With several inches of snow falling Friday, on top of ice that's been there for days, many Super Bowl activities across the Dallas-Fort Worth area have been postponed or canceled.

Goodell noted that much of the country is enduring similar conditions. He indicated it wouldn't jeopardize the area's chances of hosting the game again, mainly because of the most important aspect: Cowboys Stadium. A crowd of more than 100,000 is expected, ensuring a huge profit for the league. There's a roof, too, ensuring perfect playing conditions.

"Frankly, that's our stage," Goodell said. "You're going to be seeing the Super Bowl from one of the greatest stadiums in the world. ... The fact it can handle weather by closing the roof is a benefit."