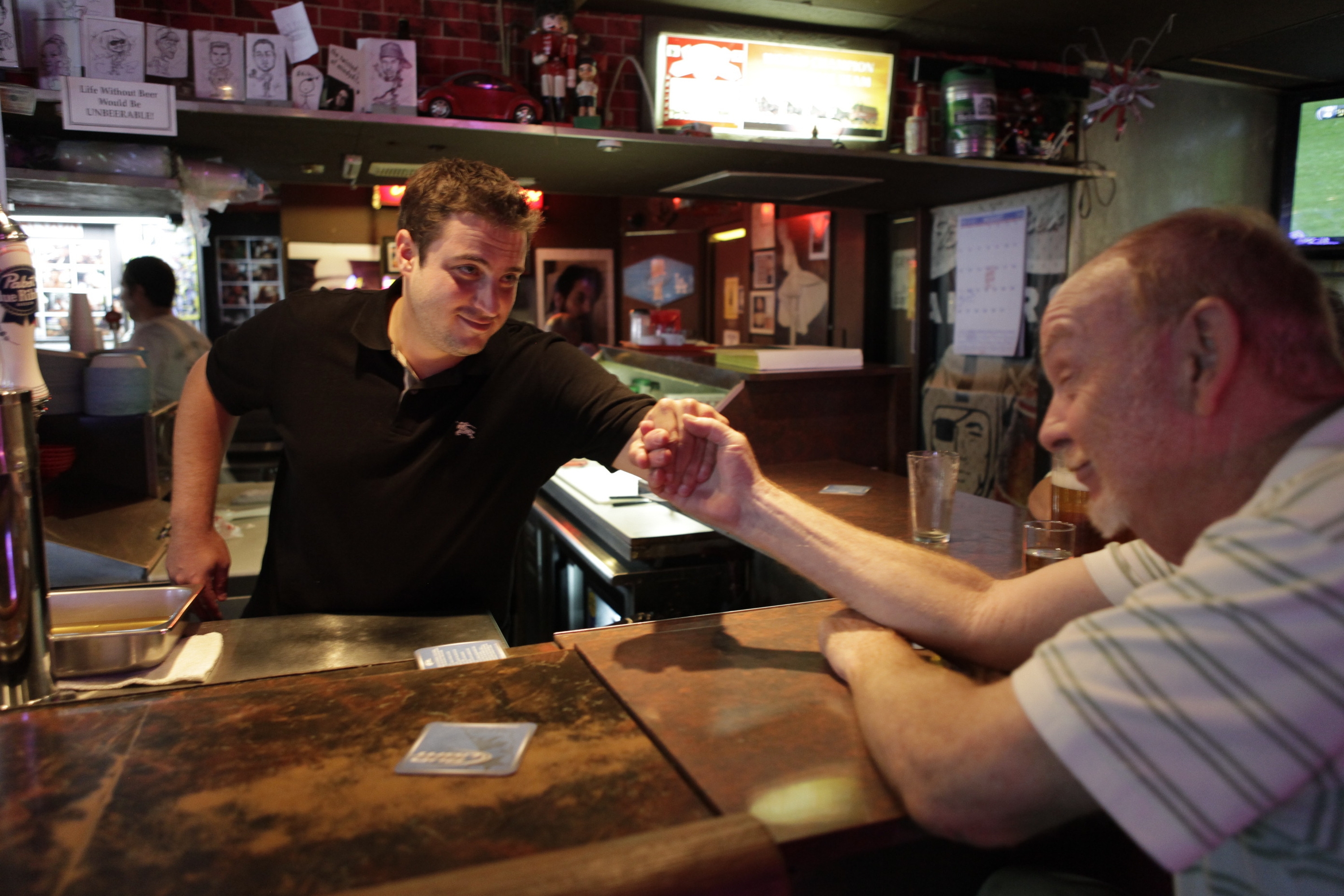 (AP) LOS ANGELES - Unlike that place in Boston where everybody knows your name, the people who run the King Eddy Saloon like to say that once you walk through the front door of Skid Row's last great dive bar, "Nobody gives a ... about your name."

And that seems to be just fine with the folks who frequent this aging edifice on the fringes of a 50-square block area of homeless shelters, rundown hotels and warehouses that somehow, at least until now, has managed to avoid a decade of downtown gentrification.

Still, some pretty famous names have passed through the doors of the King Eddy over the years. The great LA noir writer John Fante used it as the model for the blue-collar dive bar frequented by failed writer Arturo Bandini in his classic 1939 novel "Ask The Dust." For years, LA's poet laureate, Charles Bukowski, held court at a corner table.

"I'd come in and he was sitting over there, writing on his little scrap pad, making a poem," recalls Bill Roller, a grizzled man of 74 who is dressed in white T-shirt and jeans, and who for the last 34 years has been everything from the bar's general manager to its chief philosopher and psychologist to, when the occasion called for it, the bouncer.

"I still have one of the original ones that he threw away," Roller says of Bukowski's poems. It was an angry, expletive-filled rant about LA that concluded with the poet's declaration that he couldn't wait to move away.

"He never did leave though," adds Roller with a knowing smile.

It's an attitude that could also sum up the King Eddy's time on Skid Row: Gripe all you want, but never leave.

For a century the King Eddy has survived everything the neighborhood could throw at it, from Prohibition to beer-bottle brandishing drunks to, more recently, a drug addiction epidemic that gripped the neighborhood in the 1980s and `90s.

Gentrification, however, may finally be what does it in.

After nearly 50 years of family ownership, the bar is being sold to a partnership that runs a pair of upscale watering holes just outside the Skid Row perimeter. Those places specialize in craft beers and cocktails, catering to a new, more moneyed crowd that is moving into the hundreds of high-end apartments and loft-style condos that have sprung up around Skid Row over the past 10 years.

Sometime in the coming weeks, says Michael Leko, one of the new owners, the bar will close for extensive renovations.

When it reopens, it will still be called the King Eddy, Leko said, adding he hopes to retain as much of its history as possible. But he acknowledges it will have a different, more modern look, along with prices that he says will "complement the neighborhood."

When Prohibition banned the consumption of alcohol in the 1920s, the King Eddy literally went underground. The bar was moved to the basement of the then-fashionable King Edward Hotel, where it became a favored hangout for the local cops. Caricature drawings of them in period uniforms still adorn the walls.

When Prohibition ended during the Great Depression, the bar moved back upstairs, only to confront a neighborhood that was rapidly going downhill.

Even then the King Eddy endured, serving a new clientele of blue-collar laborers who moved into the neighborhood's once grand hotels, now little more than flophouses.

"Things might have gotten a little sketchy around the area and everything over the years, but the King Eddy has kept its true integrity as a dive bar, a working man's place to get a beer," says Dustin Croick, the third generation of his family to run the place.

The King Eddy is a bar where Happy Hour starts each day at 6 o'clock -- in the morning. That's when veteran bartender Irene Rivera arrives to pour $2.50 beers and $3 well drinks and is greeted by a group that includes some of the same faces she saw the day she first arrived, 20 years ago.

These days, however, the old-timers are sometimes joined by a younger crowd from the apartments and condos.

"Shot, shot, shot, they all want their shots backed by beer," Rivera, dressed in a Marilyn Monroe T-shirt and jeans, says with a laugh. The only difference between the young crowd and the old one, she adds, is the kids ask for more expensive brands of whiskey and beer.

Then they'll sit down, side-by-side with old-timers like Frank Borst, a gregarious, gravelly voiced man of 67 who says he has been drinking at the King Eddy "seven days a week, every day," since the Jimmy Carter administration.

Sitting at the bar with a snappy looking fedora perched atop his head on a recent morning, the retired cook, who lives upstairs at the modest, 106-year-old King Edward Hotel, sipped a beer and told tales of days gone by.

Milton Berle walked in one time just to use the bathroom, Borst says. Because everybody knew his name they suspended the "customers only" rule for him.

More recently, actors and crew members from various television shows and movies filming in the area have stopped by.

Kiefer Sutherland has dropped in from time to time, Borst says, sometimes joining him and his pals in singing along to Sinatra songs on the jukebox.

"But he always told me, `I'm not him, I just look like him,"' Borst said. Until one day he came in with an entourage and owned up.

Borst doesn't know where he'll go during the weeks the King Eddy is closed or what to expect when it reopens. But he's certain of one thing: