Ward Sloane is a CBS News producer based in Washington. 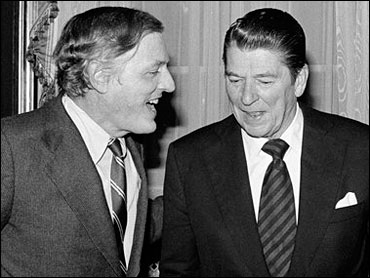 As I read the first wires on the death of William F. Buckley this morning, I thought how appropriate that he should die during the year that the conservative movement seems fractured, a shadow of its once formidable presence.

Buckley was conservative before conservative was cool. He was brilliant, Ivy League, handsome and very, very, VERY articulate. And he was, well, so very self confident. All of his talent and style combined to rebirth the moribund conservative movement in this country. From his founding of the National Review to the day he stepped down from moderating his signature talk show, "Firing Line." It is fair to say that Richard Nixon, Ronald Reagan and Newt Gingrich all owe their place in American history to the man who once famously wrote that he didn't know anyone smarter than himself.

Ronald Reagan was the man who is most associated with making the "L-word," that is, Liberal, a dirty word. But it was Buckley who first started mocking and ridiculing liberals as being out of touch with mainstream America. Eventually he demonstrated through thoughtful and forceful debate that conservatism could not only survive, but thrive in the American marketplace of ideas. There are others who contributed, but Buckley was the vanguard.

In a way, it's sad that people like Rush Limbaugh and Michael Savage are today's mouthpieces for conservatism. What a far leap they are from the quick witted and smart Buckley. I think it's fair to say that even Buckley's ideological enemies admired him and respected him. That's because Buckley was not a hate monger; he was a serious-minded person who made reasoned and rational arguments for his cause. No apologies to Limbaugh, Savage or their listeners and adherents—they are no substitute for Buckley's class and intellectualism.

The conservative movement in this country is badly in need of somebody who can make a point without demeaning and demonizing liberals and moderates. Surely there are better "uniters" than Ann Coulter or Bill O'Reilly. Are there any conservatives who think that the Limbaugh-ization of conservatism may have something to do with its fractiousness? After all, one man's hate is not necessarily another's. This is not William F. Buckley's conservatism.

The inability of conservatives to unite around a candidate before the primaries started this year is testament to the decline of the right. By the time Mitt Romney became the candidate, it was too late. Even he couldn't unite the right. In 2000, conservatives overcame misgivings about George W. Bush's lukewarm anti-abortion rights stand to unite around one candidate. If he were running this year, I doubt he could turn that trick again.