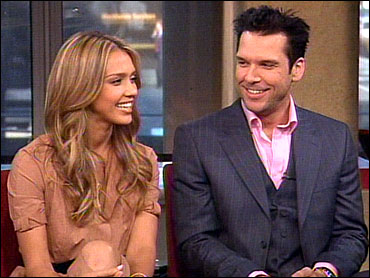 A charity found its good-luck charms in Jessica Alba and Dane Cook, who attended a screening of their new comedy, "Good Luck Chuck," at a Knoxville theater.

Fans paid $75 to see the actors and attend the screening, which raised $260,000 for Variety of Eastern Tennessee, a charity benefiting children with disabilities.

Knoxville-based Regal Entertainment Group has hosted several screenings to benefit Variety, including a showing of "Talladega Nights" with Will Ferrell and "The Dukes of Hazzard" with Jessica Simpson, Seann William Scott and Knoxville native Johnny Knoxville.

Alba gained fame as an action star, first on TV's "Dark Angel," then in films such as "Fantastic Four" and "Sin City."

Cook, who began as a comedian, has starred in "Employee of the Month," with singer-actress Jessica Simpson as well as hosting Saturday Night Live and doing standup for HBO specials.