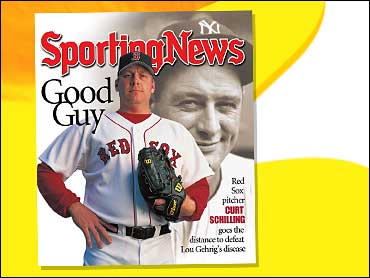 Here are related links for June. Check back regularly for updated links and additional show-related information.

Schilling and his family have dedicated their time and efforts raising awareness for Amyotrophic Lateral Sclerosis (ALS), more commonly known as Lou Gehrig's disease. Schilling and his wife started the "Curt's Pitch Foundation" in November of 1992, which is dedicated to finding a cure for Lou Gehrig's disease. The Curt's Pitch Foundation and other fundraisers have raised $4.5 million for ALS charities in Philadelphia, Phoenix and Boston.

Schilling and his wife, Shonda Schilling, also started SHADE, which increased education and awareness about melanoma, which, if undetected, can be fatal within six months.

For more information, go to:
The ALS Association
The SHADE Foundation

Moderate to high pollen levels dominate most of the continental United States. One of this week's pollen hot spots is Palm Springs, Calif., as trees and grass pollen are primary allergens.

The Weather Channel provided The Early Show with the latest on pollen count -- the culprit behind many allergies.

To get a pollen forecast in your area go to Weather.com

Despite an estimated 20,000 organs and 900,000 tissues and corneas being transplanted in the United States annually, 17 people die each day because their needs for organ transplants were not met.

David Fleming, the executive director of the Coalition on Donation, stopped by The Early Show to discuss the benefits of organ and tissue donation.

Currently, more than 80,000 people are on the waiting list for organ and tissue donations.

To find out how to become an organ and tissue donor, go to Donatelife.net.