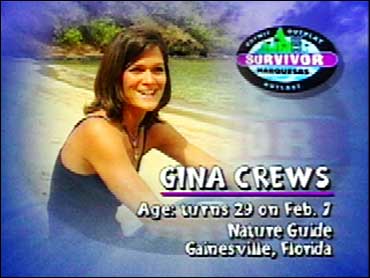 Another immunity challenge win for the Rotu tribe forced the four remaining members of Maraamu to send a member of the "family" home. Gina Crews, the only original member of Maraamu, was unanimously voted off by Paschal, Neleh and Kathy. She joined Jane Clayson on The Early Show.

Clayson wanted to know if Gina was voted off simply because the original members of the Rotu alliance stuck together?

"I don't necessarily think it was that simple but they did have a bond that formed in the first 10 days. They didn't have to play the game. So whenwe had to go to our first tribal council as a five-member group, when we voted Sarah out,they didn't experience the game until then," Crews said. "It's hard to step in and break up some bond that was formed."

She said she understood their vote and that she did have a bond with them. But, she added: "I know that in the immunity challenge, I probably would have given them a run for their money so it was a good time to get me out."

Clayson noted Crews "had two very different experiences" and asked her to compare the first tribe with the second.

"The first tribe was -- it was very difficult for me there because I went into the game and I wanted to play as a team. All those members -- most of those problems were caused by playing as an individual and that kind of left a bad feeling in me."

Clayson asked, "Were they individuals or were they just flat lazy?"

"A little bit of both, I think," replied Crews. "You know, I've always had to work very hard for everything I've ever gotten and to go out there and not to want to get involved in trying to get food and water was a very difficult thing for me to handle."

"You said that the switch was the best day of the game for you," Clayson remarked.

"It was. It was the best day, probably since I had gotten a call that I had my first interview in Atlanta," Crews bubbled. "It was awesome, you know, I felt refreshed and actually it was an experience. That's how I wanted to experience 'Survivor.' It was a family feeling."

Crews talked about the reward challenge. "It was awesome. I have to say that's probably the best race I've been in. We were literally two minutes behind those guys and they did not have a clue of what was going on in the water. Kathy and I got out there and worked together and, you know, just came ahead and won."

Clayson wanted to know what happened during the immunity challenge.

"We just did not work as a team during the immunity challenge. That's the number one problem right there," Crews said. But she also didn't blame Kathy who had been leading the tribe. "We kind of put her in that position. We chose, you know. She said, 'I'll go first.' We said, 'That's fine.' So we put that in her hands; so it wasn't her fault.

Crews, who has a degree in wildlife ecology is a real outdoorswoman. She said the physical side of the game wasn't hard. "I never once felt challenged, to be honest with you," she told Clayson.

"With my first team, I was challenged just because -- in a different way, but as far as the environment and basically the game, I never felt really challenged."

Crews explained her strategy: "To play the game as I wanted to and that was to be a nice person and to basically do what I would do in life. That's what I did." And yes, she thought a nice person could win. "I think you can comfortably win as a nice person. That game is so wild. It's 85 percent luck."

Clayson asked Crews to talk about her old tribe mates and new tribe mates. "First thing that comes to your mind -- Rob?" she asked?

Crews was blunt. "A little stupid on the island but a great person. He's -- you know, it's the way he played the game. I just -- I think he could have strategized a lot better and things could have been a lot differently if he would have made one, you know, crucial decision early in the game and he didn't. He chose to go another way and even talked about it and I think that was a stupid decision on his part, but he still is in the game and I'm not so I guess he's smarter than I am."

Clayson asked, "What about Sarah?"

"You know, Sarah is a nice girl. She really is. I got to know her, you know, after I got voted off but in the game. I think she could have played it a little bit differently. You got 16 people that are playing the game differently. Every one of them has a different strategy. And I didn't like hers in the game at all. And, of course, she was one of the ones that voted out Miss Patricia and Hunter," Crews answered.

And, she was asked about her good friend Hunter. Apparently they had bee seen together since coming back from Survivor. Was something going on?

Clayson then revealed something about Crews that not many people might have known. Crews was the National Watermelon queen.

"It was a public relations job, " Crews explained. "I traveled around the United States, Canada and Mexico promoting watermelons."

Sounds kind of typical for a Survivor. 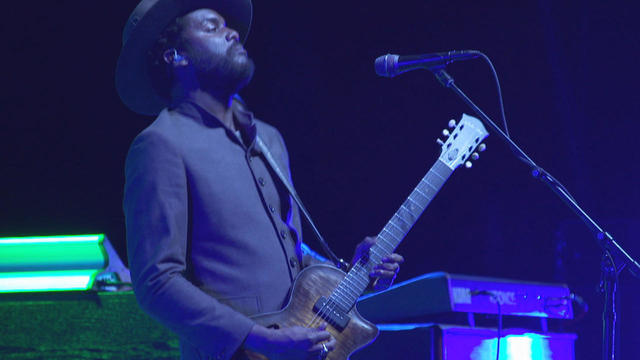 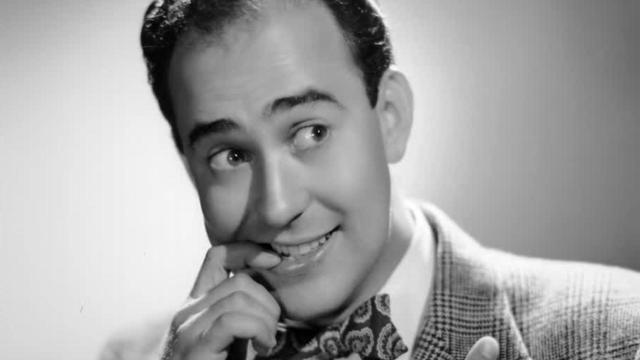 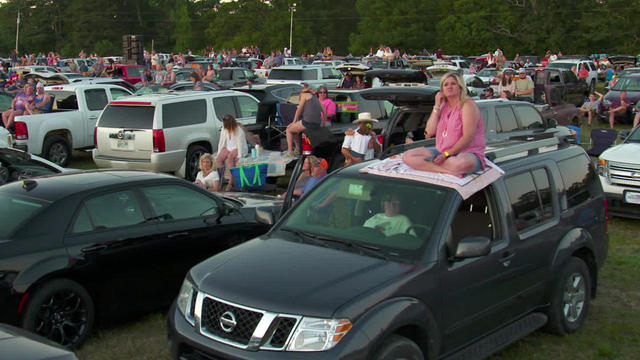