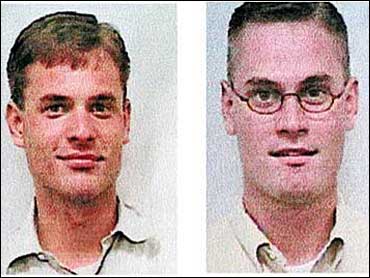 A church pastor and his twin brother have been charged with severely beating an 11-year-old boy with a stick as punishment for cheating during his Bible studies.

According to police, the 22-year-old pastor beat Louie Guerrero for an hour on July 3 while the brother held him down, at one point allowing the boy a bathroom break.

"They turned the radio up loud ... and made the boy lay face down on the bed and commenced to hit him," Bobby Taylor, the family's attorney, told CBS News.

Joshua Thompson, pastor at Capitol City Baptist Church, and his brother Caleb turned themselves in to police Tuesday. Both men are charged with felony injury to a child, punishable by up to life in prison.

Joshua and his brother allegedly took Louie to Caleb's house for the beating, where they turned up the radio to cover the child's cries, police said.

The two men then took Louie back to his home, where they met his mother and stepfather and said they had a "big problem." Joshua told the boy's stepfather that he should "beat Louie for two more hours" to fix it.

"Do it!" Joshua said three times, according to court papers. Joshua said he would not allow Louie back to the church, so his bad example could not affect the other children.

The boy remained hospitalized Tuesday, where a nurse told investigators that his kidneys had failed and that he required a blood transfusion. Taylor said the boy was in fair condition.

Detective Douglas Havens said the boy told police that Joshua, who runs services for the church's Spanish-speaking members, accused him of cheating on memorized Bible verses.

Court records allege the beating was to physically "break" the boy for lying, Joshua allegedly told the boy's stepfather afterward.

Havens said the boy told police that in the past he had been spanked or forced to maintain a push-up position for an extended period, and that he has seen other children physically disciplined.

"It seems to us at this time that harsh or severe discipline is a characteristic of this segment of the church," Havens told CBS News.

Taylor said others members have called him alleging abuses and that he advised them to call police. He also accused the church of teaching physical punishment as part of its doctrine.

"These people thought this is the way it's supposed to be because that's what they were taught," Taylor said.

Jerald Finney, the men's attorney, said the church has a strict policy against corporal punishment.

The brothers' father, Hank Thompson, is pastor of the church and leads the main congregation of about 300 members. Calls to his home and the church, which describes itself as "independent fundamental," went unanswered Tuesday.

Thompson told News 8 Austin that he believes his sons were trying to discipline the boy, but he doesn't think they alone caused the injuries.

"My son would've used a thin switch, that I'm positive of," he told the television station. He added: "My policy would've never been on the back like that ever. It would've been on the bottom."

Jerald Finney, the Thompsons' attorney, said many false statements have inflamed the local community against the parish, where he is a member.

``They're trying to create mass mob hysteria,'' Finney said, ``instead of proceeding with checking out the facts.''

Asked if the church teaches parents to physically discipline children, Finney said, ``They do teach the Bible. The Bible teaches you to love your child and train your child. Any punishment that is meted out should be appropriate, not to hurt the child.''

Arrest warrants for the brothers were issued on Monday and they turned themselves in to the Travis County jail Tuesday afternoon.