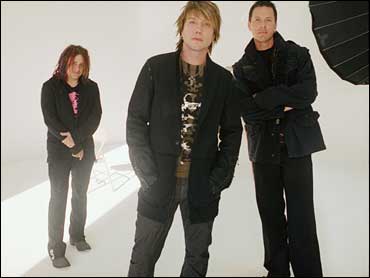 The Goo Goo Dolls are exactly where they want to be right now: on the road.

They kicked off their lengthy summer tour on June 15 in Phoenix, and they'll be out until October, playing stops in North America, Japan, Scotland, Ireland and the U.K.

The Goos were supposed to be on stage in Los Angeles tonight, but they rescheduled the date to Sept. 6, when they'll headline a benefit concert for the Griffith Park Recovery Fund. More than 800 acres of the park suffered severe damage in a fire in early May.

Bassist/vocalist and founding member Robby Takac lives in L.A. on the rare days when he's not on the road, but he still has deep roots in Buffalo, N.Y., where the band got its start.

"We're building a studio in Buffalo," Takac told The ShowBuzz, "and we're planning on going in to work on a new record."

No date is set for the album's release, but Takac notes that this is the first time in the band's 22 years that they've planned ahead while on the road.

"We've never ever been on tour before, talking about making our next record," he said with a laugh. "Usually we're talking about breaking up, although we never did."

Instead of breaking up, Takac and fellow founding member, guitarist/vocalist John Rzeznick, "just decided we needed some outside stimuli to sort of remind us why this is a great band."

"I met John when we were 20, you know?" Takac said. "I'm gonna be 43 in September, so we've known each other a long time, and we were roommates, and now we're roommates two years at a time. So it's very intense!"

The intense touring is part of the band's approach to what Takac sees as a new music business. Instead of putting the emphasis on selling records — which he says is harder to do in the current environment — they're selling tickets to their shows.

"We were lucky because we kind of slid in under the gate, before the music industry changed," he said. "We have a lot of songs that are still played on the radio. We had 13 Top Ten hits — to hear that number is insane!

"That means that people like to come see our band play because they know a lot of the songs. Now we have a career, (but it's) carny-like because you have to stay out all the time. We're starting to see that we've got a pretty cool place in this whole thing."

In 2006, the Goo Goo Dolls released their eighth studio album, "Let Love In," which included a cover of Supertramp's "Give A Little Bit" and the singles "Better Days, "Stay With You," and the title track. Their new single, "Before It's Too Late" is featured on the soundtrack for the upcoming movie "Transformers."

A CD/DVD version of "Let Love In" was released in February. The DVD contains video of the band playing the entire album and five additional songs live for an intimate group of family and friends at the landmark Capitol Records building in Hollywood.

"To watch this performance, it's like us playing in the studio for 15, 20 people who had never heard the songs before," Takac said. "So the overly-used word 'intimate' was very, very appropriate in this case. I'm glad we captured that moment."

Although they clearly enjoy their Goo Goo Doll gigs, Takac says the band members keep things fresh by going out and doing their own side projects.

"For us to be able to go out and try other things makes us feel really good and makes us feel especially good when we get back out there doing that thing we know how to do and we've been doing for twenty years," he said.

On the rare occasion Takac has some downtime, he enjoys a rather unusual hobby: collecting Pez dispensers.

"I haven't done an accurate count," he said, "although this conversation is driving me towards doing one, but I bet I have 2,000."

His prize possession is his Dopey Pez dispenser, a gift from his wife. "Dopey's one of my favorites, and it's the only dwarf they ever made," he said. "It's probably worth $300. I have other ones that are probably worth a little more now."

Takac said that after his interview with The ShowBuzz that he was taking a trip to the drug store to pick up the new Shrek Pez dispensers.

"You wouldn't believe the things that go on in my day!" laughed Takac.