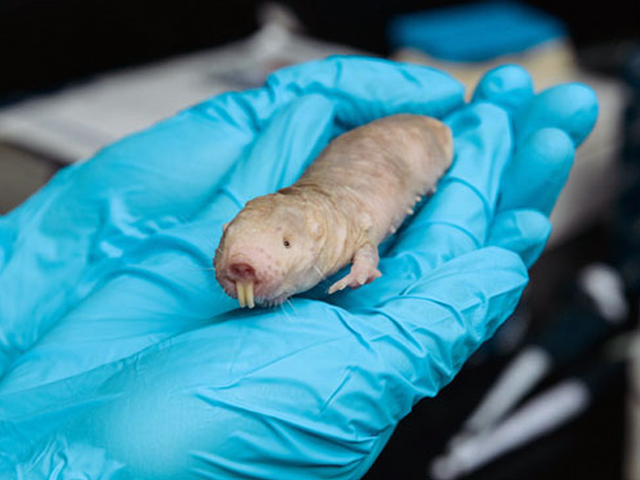 The naked mole rat may hold the secret to cancer resistance.

Scientists have identified a chemical that they say prevents the notoriously ugly rodent with a long lifespan from developing cancer. They hope the substance could one day lead to effective cancer treatments in humans.

"A lot of cancer research focuses on animals that are prone to cancer," study author Vera Gorbunova, a biology professor at the University of Rochester in N.Y., said in a news release. "We think it's possible to learn strategies for preventing tumors by studying animals that are cancer-proof."

Naked mole rats are buck-teethed, bald, wrinkly rodents that live to an average age of 30, decades longer than other rodents. The creature has been found to have an innate resistance to cancer and pain, and can survive in underground conditions with little oxygen.

For the new study, the biologists took cellular samples from naked mole rats searching for clues to their cancer resistance. That's when they discovered a gooey substance clogging up their equipment. That was a red flag, because other cell cultures from humans and other rodents like mice and guinea pigs lack that viscosity.

"Our lab technician was unhappy because she needed to disassemble the system and clean all this gooey stuff," study co-author Dr. Andrei Seluanov of the University of Rochester, told Nature. "I told my graduate student that we have to find out what the gooey substance is -- it should be related to their cancer resistance. Of course, at that time it was just a wild guess."

Gorbunova and Seluanov also found the gene responsible for making HMW-HA, called HAS2. Other animals also have this gene, but the naked mole rats was different. Their HAS2 somehow slowed the frequency HMW-HA gets recycled by cells, causing it to build up in the rodent's tissues.

Hyaluronan is found in animals and aids in the tissue-healing process, according to the scientists, who speculate the rodents developed higher levels of it in their skin to adapt to life in underground tunnels.

They next hope to test whether HMW-HA could protect against cancer in mice. After that, the hope is to try on human cells.

HMW-HA is sometimes used in anti-wrinkle creams and relieve knee pain from arthritis, according to Seluanov, so he hopes that indirect evidence of the chemical helping people suggests the benefits could extend to anti-cancer care.

The study was published June 19 in Nature.

"If we could alter our (hyaluronan) or stabilize it somehow, we may be able to suppress cancers," Carlo Maley, an evolutionary cancer biologist at the University of California, San Francisco, who was not involved in the new study, told Science Magazine.

Previous research into the naked mole rat, in which the creature's genome was sequenced, eyed other genes that may play a role in tumor suppression.

Rochelle Buffenstein, a professor of physiology at the University of Texas Health Science Center who has researched the naked mole rat's cancer resistance, told National Geographic that HMW-HA may not be the magic compound offering protection.

"This is now the third study to provide a potential mechanism," she said. "Clearly there are multiple anti-cancer defenses employed in the naked mole rat."