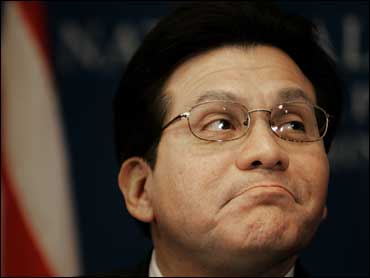 Sixteen months after resigning in disgrace, Alberto Gonzales had the gall this past week to declare himself "one of the many casualties of the war on terror," a statement so preposterous and offensive that it unintentionally explains precisely why the former Attorney General of the United States finds himself a self-described outcast in the world of law and politics.

The man is a walking, talking herald for his own colossal failures.

In an extraordinary interview this past week, the man who enabled the worst scandal at the Justice Department since Watergate rhetorically asked: "What is it that I did that is so fundamentally wrong, that deserves this kind of response to my service?"

The man who rubber-stamped our government's dubious torture policy and controversial warrantless surveillance work then told Evan Perez of The Wall Street Journal: "For some reason, I am portrayed as the one who is evil in formulating polices that people disagree with."

For some reason? Can it really be true that Gonzales still does not understand how poorly he performed and how much damage he caused to the rule of law?

Is it conceivably possible as we enter 2009 that he honestly believes he did nothing "fundamentally wrong" at the Justice Department during the U.S. Attorney scandal? Does he fail to understand that his last, pathetic appearance before Congress - in which senators literally laughed in his face for his lack of recollection about key events - reflects a broader rejection of him by Washington's Establishment?

Gonzales deserves the full measure of scorn he currently is receiving from the best and the brightest in the nation's capital. He allowed (or he encouraged) federal prosecutors to be threatened (and ultimately judged) by partisan hacks. He allowed zealots like John Yoo and David Addington to hijack our privacy rights. And if he wasn't officially the "architect" of the government's embrace of torture as a policy option, he was at a minimum the "general contractor" or the "building inspector" who ensured that the odious policy was approved.

These allegations are only the beginning of the litany of charges history will heap upon Gonzales' tenure as Attorney General (and, before that, as White House counsel). Violent crime rose during his tenure at the Justice Department, as did illegal drug use in many suburban and rural areas of the country. Terror law prosecutions - like the conspiracy trials of Zacarias Moussaoui - were often a travesty upon justice. And Gonzales failed or refused to broker an honest, workable deal among Congress, the Pentagon, the White House and the federal courts when it came to the rights of terror detainees.

Alas, it's not uncommon for a shamed public official to wallow for years in self-pity. You need only to view the fantastic film "Frost-Nixon" to see that dynamic in action. But Gonzales is whining now, specifically, because he also wants your pity (and, if possible, a few headlines). Why? Because (he complains mournfully to the Journal) he can't find a job at a law firm, and so far has been unable to find a publisher for a book.

In his mind, he is a casualty because he has been unfairly judged for actions and reactions beyond his control.

That's a stunningly ironic (and self-absorbed) position to take when you are directly responsible for some of the real and tangible, living and breathing casualties of the war on terror - men and women who have been wrongly imprisoned without a right to challenge their confinement, to name just one example. Are we supposed to feel worse for Gonzales than we do for the terror detainees who languished for years at Guantanamo Bay, Cuba, long after our government knew they hadn't committed a crime or were a threat to our security? How about the citizens here in the States whose e-mails and phone conversations were illegally monitored during Gonzales' tenure?

(CBS/AP)
Gonzales' comments display the same level of detachment from reality (and responsibility) that he displayed throughout the course of his public life. In Texas in the 1990s, working for his patron George W. Bush, he signed off on clemency memos that were so bereft of fair analysis that they should have resulted in him losing his law license.

As White House counsel he infamously paid a ghoulish visit to John Ashcroft's hospital bed to try to get the ailing, medicated official to sign off on domestic surveillance.

And then he came to the Justice Department and ruined it.

So it's no surprise, then, that the big, rich law firms don't want Gonzales anywhere near their offices. He's politically toxic, which destroys his ability to be one of those successful law-firm lobbyists Washington seems to grow like weeds. And he is just not smart enough, or courageous enough, to work as an effective trial or appellate lawyer on behalf of clients. He thinks he's not getting a corner office because of the looming threat of indictment. I think he's not getting a job in the law because no one wants him as their lawyer. Would you?

It's also no surprise that no one wants to publish his book. The only way Gonzales will get his coveted tell-all deal is if he promises to be candid, repentant and, most of all, self-aware … and why in the world would he suddenly decide to be those things? The U.S. Attorney scandal didn't bring them out in Gonzales. Nor did sharp and vital Congressional questioning. And it's clear from this latest bomb of an interview (within the friendly confines of the Journal, no less) that Gonzales' "Oprah Moment," in which he confesses his venal sins and begs for redemption, may never come.

So instead of pretending he is a victim - and thereby insulting the real victims of the legal war on terror - maybe Gonzales could slink back to Texas and get a job there. Or instead of pretending he is a martyr, and thereby insulting the brave public officials who did stand up for the Constitution these past eight years, maybe Gonzales could instead become a professor at Pat Robertson's Regent University, the third-tier law school whose graduates (Monica Goodling, for one) turned into the hacks that ruined the credibility of the Justice Department. Takes one to teach one, right? Whatever.