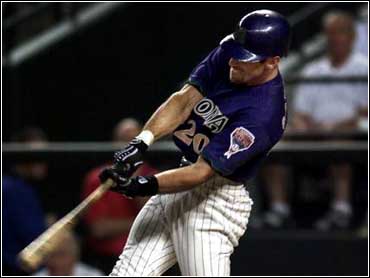 Luis Gonzalez drove in five runs in his second two-homer game in four days and the Arizona Diamondbacks ended Andy Ashby's five-game winning streak with an 8-4 victory Thursday night over the Atlanta Braves.

Gonzalez had a three-run home run in the first, an RBI double in the third and a solo homer in the fifth, all off Ashby (7-8), as the Diamondbacks took two of three from Atlanta.

Jason Conti, in his third game since being recalled from Triple-A Tucson, was 3-for-4 with a two-run single in the fifth. He also threw out Brian Jordan at third base from right field for the second night in a row.

Conti threw him out Thursday when Jordan tagged from second in the second inning. On Wednesday, Jordan was caught trying to go first to third on B.J. Surhoff's single.

Tony Womack stole four bases to tie his career-best, set with Pittsburgh in 1997, and break the Diamondbacks team record. He had not stolen more than one base in a game all season.

Jordan hit a three-run homer off starter Brian Anderson and pinch-hitter Wally Joyner had a solo home run into the swimming pool beyond the right field fence off reliever Johnny Ruffin.

Anderson (9-4) got his first victory since June 26, ending a frustrating stretch when he was 0-2 with four no-decisions despite giving up no more than three runs in five of his six July starts. Anderson allowed three runs on eight hits in 5 2-3 innings.

Ruffin relieved Anderson with runners at first and third and two outs in the sixth, and Andres Galarraga grounded into a fielder's choice.

He hadn't allowed more than two earned runs in any of his previous five starts. Since coming to Atlanta in a trade from Philadelphia, Ashby was 3-0 with two complete games and a 0.78 ERA. But he was in trouble from the start this time.

Womack reached on a fielding error by first baseman Galarraga to start the game. Jay Bell walked before Gonzalez homered to right on a 2-2 pitch.

Bell singled and scored on Gonzalez's double to make it 4-0 in the third, then Jordan's homer cut it to 4-3 in the fourth.

Womack's two-out RBI single in the bottom of the fourth increased the lead to 5-3, then the Diamondbacks scored three more in the fifth.

Gonzalez led off the inning with his 24th home run of the season. Matt Williams doubled and Terry Mulholland relieved Ashby. Finley singled, then Alex Cabrera was hit by a pitch to load the bases for Conti, who singled on an 0-2 pitch to drive in two runs.