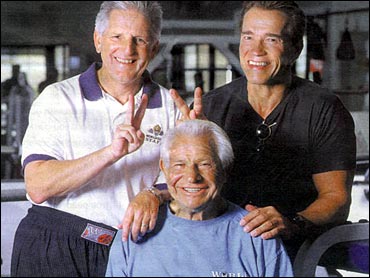 Joe Gold, a bodybuilding pioneer who founded a beachside gym made famous by then-bodybuilder Arnold Schwarzenegger, has died. He was 82.

Gold's death on Sunday at a Los Angeles hospital was confirmed Monday by Dave Reiseman, a spokesman for Gold's Gyms. No further details were immediately available.

Gov. Schwarzenegger issued a statement in which he called Gold "a trusted friend and father figure."

"In 1968, when I came to America, Gold's Gym was the gym where I first went to work out. Joe looked after me and encouraged me, and his dry sense of humor was a daily feature of the gym," Schwarzenegger said.

Gold founded his first gym in 1965 in the Venice area of Los Angeles.

"He made most of the equipment. It was custom-built for bodybuilders," said Peter McGough, editor-in-chief of Flex magazine. "That whole Venice Beach, Gold's Gym, it is sort of a hallowed era and hallowed ground for bodybuilders."

Before becoming an actor and politician, Schwarzenegger's appearance in the 1977 movie "Pumping Iron" helped make Gold's Gym a destination for bodybuilders.

Gold, a Los Angeles native, sold the gym in 1970 and returned to the merchant marine, which he had joined after serving in the Navy in World War II.

Under new owners, Gold's Gym became a franchise operation, eventually expanding its reach to 43 states and 25 countries. Gold's also licenses the Gold's name for health-related products, such as apparel, exercise equipment, and food and drink supplements.

"All of us at Gold's Gym are saddened about the passing of Joe Gold. He was an icon in the bodybuilding and fitness industry and we will never forget his contributions," said Gene LaMott, president and CEO of Gold's Gym International.

Gold himself returned to the gym business in 1977 when he established World Gym.

Though he had been ill in recent months, he continued going to work at the World Gym headquarters in Marina del Rey, McGough said.