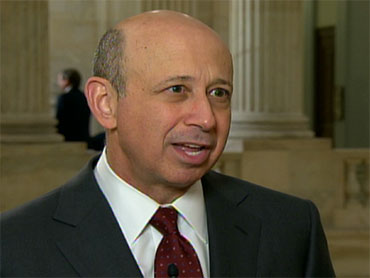 Goldman Sachs CEO Lloyd Blankfein says he thinks "nothing unethical has happened" at his firm, but he'd fire anyone caught doing anything unethical or illegal.

In an interview after Blankfein and several current and former Goldman executives were grilled at length Tuesday by members of the Senate Permanent Subcommittee on Investigations, Blankfein steadfastly defended his firm, as he and the others did during the hearing.

Asked by CBS News Business and Economy Correspondent Rebecca Jarvis whether he could "state unequivocally" that Goldman hadn't run afoul of the law or ethics under his watch, Blankfein responded, "I think that's a broad statement about a firm with 35,000 (employees). It is it is my belief that nothing unethical and nthing illegal has happened but I will tell you if I discovered something like this or any senior person at Goldman Sachs discovered illegal or unethical behavior, we would eliminate that from the firm."

Would he consider stepping down if something amiss has happened under his nose?

"Ah… again -- we're a big firm. And we would have to -- .and we police ourselves," Blankfein replied.

He said he "absolutely" feels Goldman has what Jarvis depicted as "a larger moral imperative, a greater obligation to the good of this country for Goldman Sachs to pursue."

"We could not exist without the good will of the societies in which we operate, and we take that very, very seriously," Blankfein stressed.

Acknowledging that Goldman got government bailout money, Blankfein remarked, "If you look at how we operate … we work... among our most important clients are governments, both state and local and, for that matter, the federal government and other governments around the world. … That's very, very important, and we care a lot. And, if you look at Goldman Sachs, you can see that a lot of our alumni in fact go into government service when they're done with their career at Goldman Sachs."

Blankfein also told Jarvis he believes the regulatory landscape for Wall Street is changing, and that his firm, among others, will have to adapt.

"He said he expects that new consumer protections need to be brought on board," Jarvis explained to "Early Show" co-anchor Maggie Rodriguez, "and that, among other things, also standards for how much debt banks can keep on their books will be very important to maintaining the system. It's interesting, because in his testimony he said that Goldman Sachs, among a number of organizations, failed to sound the alarm bells throughout the crisis, when he believes, and many believe, they should have done a better job of that. And hope to do a better job of that in the future."

Jarvis says Blankfein also predicted that federal regulators would bring fraud charges against other firms, as it has against Goldman Sachs.