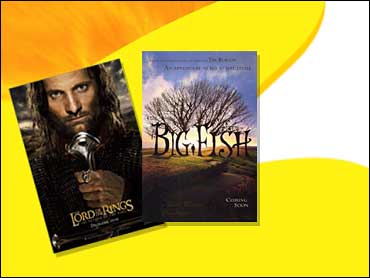 This Sunday night, the Golden Globes will be handed out in Hollywood, but some of the films are already at your video store. Entertainment contributor and People Magazine Senior Editor Jess Cagle visits The Early Show to offer his picks as well as to report what's available in our Home Theater.

The nominees for Best Motion Picture Drama are: "Cold Mountain," "The Lord of the Rings: The Return of the King," "Master and Commander: The Far Side of the World," "Mystic River" and "Seabiscuit."

Cagle says, "'Lord of the Rings' is a great accomplishment, a gamble that paid off, the only movie in this category that made me cry. Will it win? Yes."

Theron is Cagle's pick. He says, "I thought she was great, and she'll probably win. A win for Charlize would show appreciation for an actress branching out; and it becomes a great comeback story (she was in a lot of duds before she made this movie happen), so she's got some sentiment on her side. Plus, it was the only 'Wow' performance this year."

For Best Actor, Drama, out of Russell Crowe for "Master and Commander: The Far Side of the World," Tom Cruise for "The Last Samurai," Ben Kingsley for "House of Sand and Fog," Jude Law for "Cold Mountain," and Sean Penn for "Mystic River," Cagle's favorite is Cruise.

He says, "It was a subtle, surprising performance. A lot of critics have disagreed with me, and so will the Globes. They'll give the award to Sean Penn for the overrated 'Mystic River,' though he was good in the movie and great in '21 Grams.'"

For Best Picture, Musical or Comedy, the nominees are: "Bend It Like Beckham," "Big Fish," "Finding Nemo," "Lost in Translation" and "Love Actually."

Cagle says except for "Lord of the Rings," he considers "Big Fish" the most daring and imaginative movie of the year. He says, "'Lost In Translation' will probably win this category. It's received so many critical accolades, and it has more Globe nominations than 'Big Fish.'"

Cagle says his pick is Curtis. "Laugh if you will, but her performance was a testament to her sharp wit and considerable skill as an actress. Will she win?" Not likely, he says, "The Globe will probably go to Scarlett Johansson. Obviously, the Globes people love her; they nominated her in two categories."

For Best Actor in a Musical or Comedy, the nominees are: Jack Black, "School of Rock"; Johnny Depp, "Pirates of the Caribbean: The Curse of the Black Pearl"; Bill Murray, "Lost in Translation"; Jack Nicholson, "Something's Gotta Give," and Billy Bob Thornton, "Bad Santa."

Cagle says, "Johnny Depp deserves the win. The year's surprise blockbuster, 'Pirates of the Caribbean' rested entirely on his shoulders. Wouldn't have been a hit without him. But chances are the award will go to Bill Murray for 'Lost In Translation,' because he has sentiment on his side."

For Best Television Drama series, Cagle believes Fox's "24," will be the winner and in the musical or comedy series category, his pick is also from Fox, "Arrested Development." "I love it: fresh, exciting, a new twist on the sitcom format," he says.

If you have not made up your mind yet as to which film or TV series should win, you can review some of them on DVD.

Here is what is available: