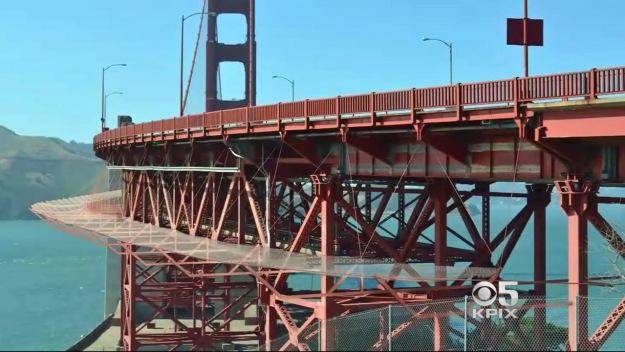 SAN FRANCISCO — Work officially began Thursday on a net under the Golden Gate Bridge intended to prevent and deter the dozens of suicides that take place at the iconic landmark each year, CBS San Francisco reported.

More than 1,500 people are thought to have died there over the bridge’s 80-year lifespan.

The stainless steel net, located about 20 feet below the bridge’s sidewalk, will span 1.7 miles of roadway on each side of the bridge and extend 20 feet out over the water.

It will be built over a period of four years, at a cost of just over $200 million drawn from a mix of federal, state and local sources.

At a ceremony today to mark the start of the project, House Minority Leader Nancy Pelosi said that during the long process of obtaining the funding for the project, people would ask her, “isn’t that a lot of money for a net?”

“And we would say no, it’s not a lot of money for a life, for all of these lives,” Pelosi said.

“Together we are acting on a deep moral imperative to save lives wherever we can,” Pelosi said.

The scenic bridge has proven to have a deadly allure over the years.

In 2016 alone, 39 people died by suicide there. Bridge patrol officers also conducted 184 successful interventions in 2016 to keep people from harming themselves.

U.S. Sen. Dianne Feinstein, a former San Francisco mayor, shared her own personal experience with a Golden Gate Bridge suicide, when radio talk show host and political activist Duane Garrett, who had worked on her campaigns, took his own life there in 1995.

Despite the many deaths, the families of suicide victims have had a long, hard battle of many years, first to win support for a suicide barrier of some sort and then to see it funded.

Local officials scrambled to assemble the last piece of funding in December 2016, after bids came in at least $120 million over original estimates.

Kymberlyrenee Gamboa, who lost her 18-year-old son Kyle to suicide on the Golden Gate Bridge in 2013, said Thursday his death had led her and her husband on a journey to determine what could have led to his death and how others like it could be prevented.

A Harvard T.H. Chan School of Public Health review found that, overall, nine out of 10 people who attempt suicide and survive will not go on to die by suicide at a later date.

Similarly, a 1978 study conducted at the Golden Gate Bridge showed that 90 percent of those who were prevented from jumping did not later die by suicide or other violent means.

Golden Gate Bridge, Highway and Transportation District spokeswoman Priya Clemens said, “The construction starts this year but people won’t see very much right now, what they’re going to see is a little bit of fencing going up that’ll protect the contractors as they’re underneath the bridge taking measurements.”

Clemens said, “The concept behind the suicide deterrent is that the people who come here don’t actually want to hurt themselves, they want to end their lives, and when you see a hard stainless steel platform two stories down that you will hit when you jump off the sidewalk, that’s going to stop you from jumping at all.”

Work crews will begin installing temporary fencing along the bridge approaches and around the tower legs in May, with installation set to follow in mid-2018.