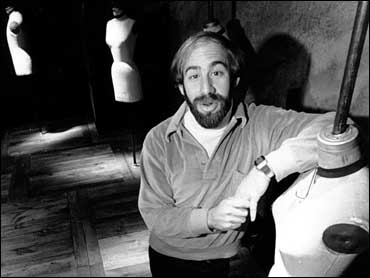 Now it's "Godspell" that is saying "no go" on Broadway.

A revival of the 1970s Stephen Schwartz flower-power musical about Jesus has announced it will not open as scheduled, the fourth production to put on hold plans for a New York run this season.

"I am devastated that, due to the loss of a major investor in the harsh reality of a slowing economy, there were no other options at this time than to postpone," Adam Epstein, "Godspell" producer, said Tuesday in a statement.

"Godspell" had been set to open Oct. 23 at the Ethel Barrymore Theatre. The musical, reportedly budgeted at more than $4 million, joins a growing number of shows that are doubtful for Broadway engagements in a nervous, recession-wary environment.

"There are so many variables in bringing a production to Broadway - theater availability, artists' schedules, and securing capitalization to name but a few," said Howard Sherman, executive director of the American Theatre Wing.

"It's impossible not to be cognizant of the national economy and its potential impact on the theater. But it's also premature to say whether the recent changes in plans by certain shows represent a trend, especially as we're likely to see other productions quickly step up to fill the available theaters in their stead."

The Barrymore, one of the more desirable Broadway theaters for plays, was quickly snatched by the revival of David Mamet's "Speed-The-Plow," starring Jeremy Piven, Raul Esparza and Elisabeth Moss of "Mad Men" fame. It opens there Oct. 23 (appropriating the "Godspell" opening date, too). Previews start Oct. 3.

And it's not the only Mamet on Broadway this fall. His "American Buffalo," starring John Leguizamo and Cedric the Entertainer, has taken the Belasco Theatre, which originally was to have housed "Speed-The-Plow." "American Buffalo," directed by Robert Falls of Chicago's Goodman Theatre, opens Nov. 17 with previews beginning on Oct. 31.

"'Speed-The-Plow' is a play about glamour, sex and power and takes place in Hollywood," said its producer, Jeffrey Richards. "I think 'Speed-The-Plow' is less familiar (than 'American Buffalo') and was overshadowed by Madonna being part of (the original production)."

"American Buffalo," a robbery tale set in a Chicago junk shop, has had several New York productions, both on and off-Broadway over the years. "But both demonstrate the versatility of David Mamet as a playwright," Richards said.

Yet another play revival was not as lucky.

Ntozake Shange's "For Colored Girls Who Have Considered Suicide When the Rainbow Is Enuf," which was to have starred the Grammy-winning singer India.Arie, collapsed after losing one of its backers and canceled its Sept. 8 opening at Circle in the Square.

Also unlikely to be seen anytime soon are two big musicals, including a revival of Lerner and Loewe's "Brigadoon." The show about a Scottish village that comes to life every 100 years was unable to find an appropriate theater. It had been scheduled for next spring. And in limbo - at least for the moment - is "Nice Work If You Can Get It," a new musical using old Gershwin songs and starring Harry Connick Jr. The project faltered after director-choreographer Kathleen Marshall withdrew from the show. Its producers are looking for a replacement.

Despite the glum news about upcoming shows, summer has been particularly good for long-running productions, from "The Phantom of the Opera" to "Chicago." Add to that list "Legally Blonde," buoyed by the MTV reality series that showcased its new star, Bailey Hanks, and "Xanadu," which got a box-office bounce when Whoopi Goldberg joined the cast in late July.

"The weak dollar has enabled an influx of foreign tourists and they go to see musicals," Richards said.

But what happens after most of the tourists and school children go home after Labor Day is uncertain.

Not much comfort, though, to the folks behind "Godspell." Said Schwartz, who wrote the score for the musical: "The cast and creative team were poised to create a terrific production and I have no doubt it will be just that when its time comes."
By Michael Kuchawara