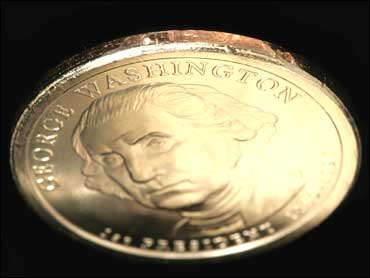 An unknown number of new George Washington dollar coins were mistakenly struck without their edge inscriptions, including "In God We Trust," and made it past inspectors and into circulation, the U.S. Mint said Wednesday.

The properly struck dollar coins, bearing the likeness of George Washington, are inscribed along the edge with "In God We Trust," "E Pluribus Unum" and the year and mint mark. They went into circulation Feb. 15.

The mint struck 300 million of the coins, which are golden in color and slightly larger and thicker than a quarter.

About half were made in Philadelphia and the rest in Denver. So far the mint has only received reports of error coins coming from Philadelphia, mint spokeswoman Becky Bailey said.

Bailey said it was unknown how many coins didn't have the inscriptions. Ron Guth, president of Professional Coin Grading Service, one of the world's largest coin authentication companies, said he believes that at least 50,000 error coins were put in circulation.

"The first one sold for $600 before everyone knew how common they actually were," he said. "They're going for around $40 to $60 on eBay now, and they'll probably settle in the $50 range."

Production of the presidential dollar entails a "new, complex, high-volume manufacturing system" that the mint will adjust to eliminate any future defects, the mint said in a statement.

"We take this matter seriously. We also consider quality control a high priority. The agency is looking into the matter to determine a possible cause in the manufacturing process," the statement said.

The coin's design has already spurred e-mail conspiracy theories claiming that the religious motto was purposely omitted from the Washington dollars. That rumor may have started because the edge lettering cannot be seen in head-on photographs of the coins.

The Washington dollars are the first in a series of presidential coins slated to run until 2016. After Washington, the presidents to be honored on dollar coins this year will be John Adams, Thomas Jefferson and James Madison.

Bailey said the striking of the Adams coin, expected to roll out in mid-May, will proceed as planned.

"We are adjusting the manufacturing process to try to eliminate the problems," she said.