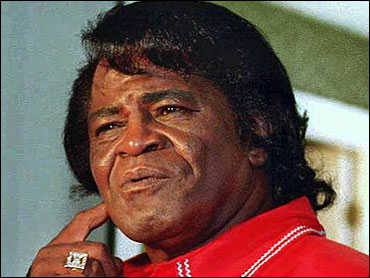 James Brown had plenty of reason to feel good on Tuesday as South Carolina officials pardoned the soul legend for his past crimes in that state.

Brown, who served a two-and-a-half-year prison term after a 1988 arrest on drug and assault charges, and was convicted of a drug-related offense in 1998, was granted a pardon by the state Department of Probation, Parole and Pardon Services.

Brown, who appeared before the board, sang "God Bless America" after the decision, said his publicist, Dan Forman.

"God bless America on this beautiful day. I hope my pardon shows the youth that America is a beautiful country," the 70-year-old singer said in a statement. "I feel good!"

Brown had friends, family and state lawmakers speak on his behalf.

Brown, famous for countless hits, including "I Feel Good," "Sex Machine" and "Living in America," unsuccessfully tried to get a pardon for his crimes in 2001. Tuesday's pardon means he is fully forgiven from all the legal consequences of his crime and his conviction.

State Rep. Ken Kennedy, who spoke on Brown's behalf, said the pardon will allow the singer to share his experiences and help others.

"I've been a fan of James Brown all my life. I've listened to his music all my life," Kennedy said. "I think this is something that he deserves. He has been one of our great entertainers in this country. He's done so much for the country and for me as a young person growing up here."

In September 1988, Brown, high on PCP and carrying a shotgun, entered an insurance seminar next to his Augusta, Ga., office and asked seminar participants if they were using his private restroom, according to authorities.

Police chased Brown for a half-hour from Augusta into South Carolina and back to Georgia. The chase ended when police shot out the tires of his truck.

Brown received a six-year prison sentence after he was convicted on charges of assault, failure to stop for a law enforcement officer, resisting arrest, carrying a pistol and drug possession. He spent 15 months in a prison near Columbia, S.C., and 10 months in a work-release program in Aiken before being paroled on Feb. 27, 1991.

In 1998, police found marijuana and guns at Brown's home when sheriff's deputies took him into custody on a probate judge's order as a "mental transport."

Brown spent a week in a private Columbia hospital, recovering from what his agent said was dependency on painkillers the singer took after hurting his back during a show.

He was convicted of use of a weapon while under the influence, but completed a 90-day drug program, O'Boyle said.

To receive a pardon in South Carolina, a person must apply to the Pardon and Parole department. The board hears about 200 or 300 pardon cases annually and about 60 percent to 65 percent of those pardons are granted, O'Boyle said.