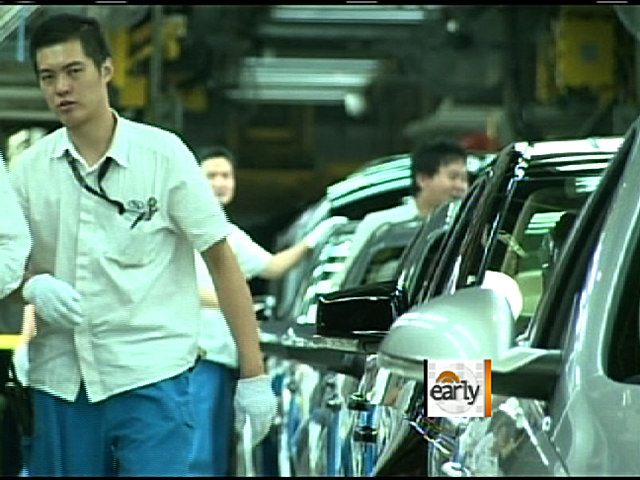 Two years after it was saved by a bailout from Washington, General Motors is trumpeting its latest investments in China.

As CBS News business and economics correspondent Rebecca Jarvis reported from Shanghai, American cars are more popular than ever in China, and U.S. automakers sell more cars there than anywhere else in the world. And while that's good news for American car companies, it makes many question what it will mean for American jobs.

If you were to visit General Motors in Shanghai, you'd find a lot of what you would in Detroit

With its Chinese partner, Shanghai Automotive Industrial Corp., GM manufactures Buicks, Chevys and Cadillacs in China -- for the Chinese market -- and employs more than 13,000 people throughout the country.

That number is set to grow, thanks to a just-announced deal to develop and build, with SAIC, the next generation of electric cars in China.

On Wednesday, GM opened an advanced technology center in Shanghai meant to help it design lighter, safer and more efficient cars for a market that has proven crucial to its survival. The facility will include a lab devoted to developing new battery cells for EVs.

And GM and General Electric agreed Thursday on a pilot installation of electric vehicle charging stations in Shanghai, the latest step in the automaker's plan to develop infrastructure in China to support sales of its Chevrolet Volt electric car.

China is, says Gibbons, "obviously very important for GM. This is a strong growth market. It's a growth industry. We're here in China to produce cars for the local market."

China is seen as a promising market for electric vehicles because of its keenness on limiting its dependence on costly imports of crude oil and reducing severe pollution from auto emissions.

The government has made development of so-called "new energy" vehicles a key part of its current five-year economic plan, promising subsidies and billions of dollars in new investments.

Last year, Chinese consumers bought 16.6 million cars -- 5 million more than the number sold in the entire U.S., according to J.D. Power and Associates.

So far, all the cars GM sells in the U.S. are made there, Jarvis says.

Asked if he can foresee the day when GM makes cars in China to sell in the U.S., Gibbons told Jarvis, "Right now, we have our hands full just producing cars for the local market, and that's what our focus is at this time."

While GM won't say whether electric vehicles will eventually going to be produced for the United States in China, Jarvis observes, "Clearly, China has a competitive advantage, with lower costs and skyrocketing sales."

In the last few days of the 2020 campaign, Trump is holding more big campaign events than Biden, who says that "massive crowds" aren't "appropriate" right now.

Rivera celebrated a his win over cancer with a hall full of doctors and nurses cheering him on.

The pivotal post-Election Day dates you need to know

Long after the "I voted" stickers go into the trash, there are a series of deadlines outlined in federal law and the Constitution that dictate what happens between Election Day and the inauguration.