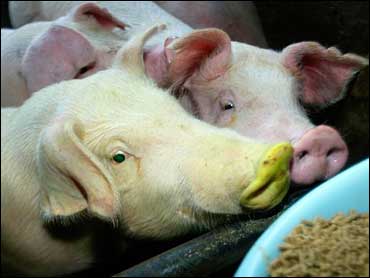 Pigs may not be able to fly just yet, but at least three of them glow.

Taiwanese researchers said Friday they have bred the pigs, all of them males, with a fluorescent material in a move they hope will benefit the island's stem cell research effort.

The fluorescent pigs are green from inside out, including their hearts and internal organs, said Wu Shinn-Chih, assistant professor of animal science at the prestigious National Taiwan University.

There are partially green pigs elsewhere in the world but the Taiwanese pigs are said to be the only ones that are green from inside out.

From the outside, the pigs appear to be bathed in a light green tint, particularly their eyes, mouths and knuckles.

Wu said the pigs are bred by injecting their embryos with fluorescent green protein taken from jelly fish.

"Only one in a hundred (injected embryos) will successfully be transgenic," Wu said. "When the embryo grows and becomes a pig, the pig will be fluorescent that glows in the dark."

Pigs are commonly used to study human diseases, and Wu believes his technique will be useful in helping researchers monitor tissue changes over time.

He said fluorescent cells would show up during stem cell treatment of diseased organs, allowing physicians to monitor the healing progress.

"This was simply an idea of ours," said Wu. "We hope it can help with future stem cell research by cutting down on the time researchers expend."

Last year, another team of Taiwanese researchers claimed they developed an alternative to laboratory mice for testing new medicines — using fluorescent fish to show the impact of experimental drugs on cancerous tumors.

They took a gene that makes jelly fish fluoresce and transplanted it into the livers of zebra fish that were then later implanted with cancer cells for testing.

The gene highlighted the cancerous tissue with a special tint, allowing the glowing zebra fish to be used for screening the impact of drugs.