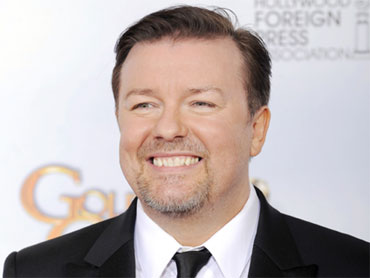 Ricky Gervais said he plans to play it loose and off-the-cuff as host of next month's Golden Globes awards ceremony, with Frank Sinatra and his pals as role models.

"I want to host it a little bit more like someone from the Rat Pack would host," Gervais said.

There won't be any prepared schticks, such as a prerecorded comedy bit or a dance number, but the star of the British version of "The Office" said he will script his remarks, to a point.

"If you're not prepared at all, it can be very flimsy and a bit self-indulgent," he said, adding he'll keep his material short and sharp because "I'm best in small doses."

Gervais told a teleconference Tuesday that he'll avoid anything cruel or distasteful but the stars on hand can expect "gentle ribbing."

"All of them, anyone younger and thinner and richer and more attractive than me. That's the ones I'm going for," said Gervais, who scored laughs as an Emmy Awards presenter by tweaking the looks of TV stars including Steve Carell and Rainn Wilson of the U.S. version of "The Office."

George Clooney likely is safe at the Globes.

Gervais, noting that Clooney is handsome, a fine actor and considered kind to everyone, said poking fun at him would be like "having a go at Mother Teresa."

The Golden Globes air Sunday, Jan. 17, on NBC. Gervais will be the ceremony's first host since 1995.

"This is the only one I could ever have said yes to. Nobody wants to see me mucking around at the Oscars" as host, said Gervais.

Golden Globe organizers said "I could turn up, say what I wanted and get drunk," Gervais said, joking that it was his kind of gig.

Gervais, who produced, directed and co-wrote the original "The Office" and recently made and starred in "The Invention of Lying," is working on a 2010 animated show for HBO based on his audio books.
By Lynn Elber