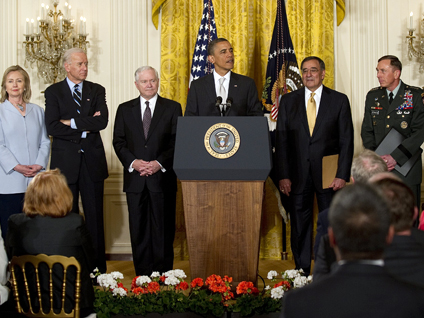 (CBS) GlobalPost is reporting that the Pakistani army had "full knowledge" of the U.S. Navy SEAL operation to capture or kill Osama bin Laden, but the U.S. government maintains that Pakistan had no clue about the 40-minute operation.

According to the GlobalPost report, Pakistan's government has been hiding its involvement in the raid to avoid a public backlash, and especially reprisals from Taliban and Al Qaeda sympathizers.

The GlobalPost article cites a senior Pakistani Army official and an Abbottabad resident, who claimed Pakistani forces provided military support for the operation, such as sealing off the area around bin Laden's compound and telling neighborhood residents to turn off their lights two hours before the attack.

In addition, the article quotes a senior military official who said Gen. David Petraeus, current commander of the International Security Assistance Force in Afghanistan and soon to be director of the CIA, held a one-on-one meeting with Gen. Ashfaq Parvez Kayani, Pakistan army chief of staff, to to discuss the details of the operation on April 25 in Islamabad.

This account completely differs from what both U.S. and Pakistan officials have been saying about the raid.

CIA Director Leon Panetta told CBS News' Katie Couric that the Pakistanis had no involvement in the operation:

"This has been a long process, obviously, developing a lot of streams of intelligence. And some of those streams of intelligence were kind of in the normal process of working with the Pakistanis. But they were never aware of our focus on this compound or in bin Laden. And we made the decision that we would not inform them that we would conduct this operation unilaterally on the part of the United States.

"I think that President Bush, President Obama have both made very clear to the Pakistanis that if we found a location where Osama bin Laden was located, that we were going to go in and get him. And I think they understood that very clearly."

Pakistan Foreign Secretary Salman Bashir has maintained that his country was clueless about the raid (which was apparently carried out by U.S. "stealth" helicopters flying below the radar) until it was underway. He said the army scrambled two F-16 fighter jets when it was aware that foreign helicopters were hovering over the city of Abbottabad, but they did not arrive in time to intervene.

On Thursday, Pakistan's army called for cuts in the number of American military personnel inside the country to protest the raid, and it threatened to cut cooperation with Washington if it stages more unilateral raids on its territory. A small number of U.S. soldiers have been training Pakistani forces in counter-insurgency operations.

Despite the tensions in the relationship and complexities of the diplomatic-speak, the U.S. and Pakistan will continue to circle around each other.  "I think we have to pay more attention, not less, to Pakistan," Sen. Chuck Schumer (D-NY) said. "I would guess that our number one foreign policy problem over the next 10 years will be Pakistan. It's nuclear. It's poor. It's ethnically divided and it's never had good leadership."