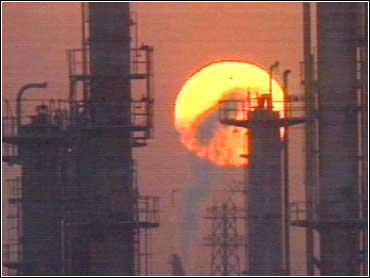 A recent series of record-breaking high temperatures may indicate a speedup of global warming, researchers say.

For 16 consecutive months - from May 1997 to September 1998 - each month broke the previous monthly world average temperature record, scientists from the government's National Climatic Data Center noted in a paper that will appear in the March 1 issue of Geophysical Research Letters.

The team led by Thomas R. Karl calculated that there is only a one-in-20 chance that the string of record high temperatures was simply an unusual event.

More likely, they indicated, it marked a change to faster warming.

"It raises a flag because it was such an unusual event that we need to watch very carefully in the next several years, because, indeed, it could be a signal of an increased rate of temperature increase," Karl said in a telephone interview.

Since completing the research, the data for 1999 have been compiled. They found that 1999 was the fifth warmest year on record. It would have been expected to be cooler because of La Nina, a cooling of the waters of the central Pacific Ocean.

Many scientists in recent years have become concerned about global warming, worrying that exhaust gases from factories and automobiles would cause the planet to warm up by trapping heat from the sun, somewhat like a greenhouse. Others, however, note that changes recorded to date remain within the scope of normal variation.

International agreements have been negotiated in an effort to slow the release of carbon dioxide in hopes of preventing a rise in temperatures that some researchers have suggested could begin having an impact within a century or so.

On Tuesday the General Accounting Office, the investigative arm of Congress, released a report implicating jet exhaust from aircraft as a factor in global warming.

Temperatures have increased during this century, although not as fast as feared by some, and long-term comparisons are hard to make with only about a century of instrument-collected temperature data available.

The researchers at the Asheville, N.C., Climate Center, part of the National Oceanic and Atmospheric Administration, analyzed data from land-based and satellite instruments.

The UN Intergovernmental Panel on Climate Change had projected the rate of warming for the 21st century to be between 2 and 6 degrees.

Karl and his colleagues are not ready to say with certainty that the rate of global warming has suddenly increased, however, noting that unusual events do sometimes happen.

John R. Christy of the University of Alabama in Huntsville suggested that a least some blame for the series of hot months should go to the powerful 1997-98 El Nino event that warmed the Pacific Ocean. Christy was not part of the research group.

Karl agreed that the strong El Nino did help boost temperatures in the 1997-98 period. However, he added, "it's important to keep in mind that El Nino is a natural phenomena but not necessarily unrelated to the forcing of man on the climate."