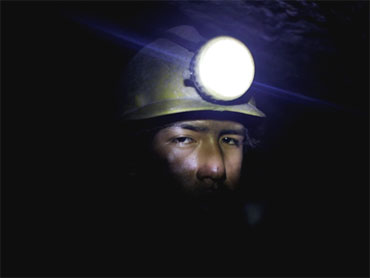 By Sara Shahriari, Special to GlobalPost

Agustin Villanca Menacho spends his days searching for silver, zinc and tin, sweating in the heat of a deep mine in southern Bolivia. He is 14 years old.

Like the vast majority of the miners at Cerro Rico, he's a Quechua Indian, and like many children working in the mines, he has no father. His died three months ago from the lung disease silicosis.

For centuries, the city of Potosi has operated around Cerro Rico, the greatest silver deposit the Spanish Empire ever found. In the 1600s, Potosi's population rivaled London's. While indigenous and African slaves died by the thousands, silver from the mines filled the Spanish treasury for more than 200 years. People in Potosi like to say you could build a silver bridge to Spain with all the metal extracted from the Cerro.

Today many children in Potosi have few options but to follow their fathers and grandfathers into the mines.

Roberto Fernandez directs Potosi NGO Yachay Mosoj, which tries to keep children in school and out of the mines. It is hard to come by reliable numbers on Potosi's mining workforce, but he estimates that out of 8,000 miners in the Cerro, 10 percent are under 18, the legal minimum age to work in a mine. In 2004 UNICEF reported there were nearly 4,000 workers under 18 in Bolivia's mining centers.

There is little political will to prevent Villanca Menacho and others his age from joining the mining ranks. Labor laws aren't strictly enforced and miners are a powerful group in current-day Bolivia, where socialist president Evo Morales relies on rural and indigenous groups for support.

And there is no social welfare safety net for families such as Villanca Menacho's, which have lost their breadwinner.

In recent years, Potosi's mining cooperatives have fiercely resisted government efforts to take more control of the sector. In the mid-1980s when tin prices crashed, the Bolivian government withdrew its mining operations from Potosi and granted concessions to many miners who hoped to continue scraping a living from the mountain.

Those who hold the concessions and invested in the mine's infrastructure get a percentage of all profits and can earn well off a fruitful mine.

Villanca Menacho, like most in the cooperatives, is not one of those investors. He averages $150 a month in wages.

(Lisa Wiltse/Global Post)
Miners say their job is like playing the lottery - though it is dangerous, the payoff can be tremendous. The hope that the next tap of the hammer will bring riches and the good life keeps them going. Everyone knows someone it's happened for, and even teachers and lawyers sometimes moonlight in the mines hoping for that big strike.

(Left: Nelson Ortuga, 14, sits in his changing room exhausted from an eight-hour shift in the Candelaria mine. After a two-hour break, he will be back in the mines until 6 a.m.)

Sitting in the courtyard outside the one-room house he shares with his mother and two younger siblings, Villanca Menacho talks about his life. "I went to the mine because my dad died, and who's going to give us money?" he asks.

Villanca Menacho hopes to return to school after working for a year, but others have given up on a life outside of the mines.

Fifteen-year-old Eduardo Colque Conde has already been working in the mine for three years. "I'll work here all my life, I think," he says. "I'm already used to it."

The mines can be terrifying places where miners slide down narrow tunnels full of choking dust to reach the lower levels. If dynamite explosions, collapsing tunnels or poisonous gasses don't kill a miner, silicosis eventually will. Protective equipment consists of nothing more than a headlamp and rubber boots. 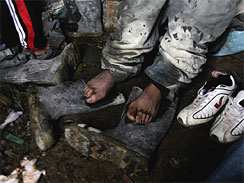 (Left: Ortuga rests his feet on top of his mining boots in the changing room of the Candelaria mine after working a double shift.)

Many miners share his attitude. They know the dangers of the mines, but bravado trumps fear. They are tough, and they are proud. They also don't have many other options in Potosi, where manual jobs outside of mining are scarce.

Though NGOs, Bolivian and foreign journalists continue to document child labor in Cerro Rico, the practice continues because it is culturally accepted, because there is little law enforcement and, ultimately, because of need.

Fernandez of Yachay Mosoj says that regardless of inspections and politics, it's impossible to stop children from working the Cerro when they have no other option but going hungry.

"Ending child labor is a fantasy without another form of living," he says.

Nepal: The Big One? - A looming catastrophic earthquake in Nepal could unleash devastation that surpasses that of Haiti or Chile.

Opinion: Do You Speak American? - Discrimination against accented workers is on the rise. Problem? You betcha.