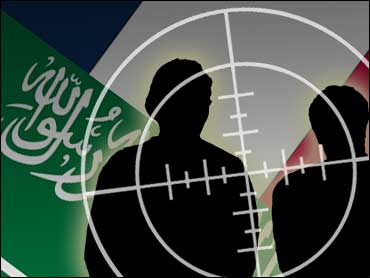 Interpol put out an international security alert Tuesday for 85 alleged terrorists suspected of plotting attacks against Saudi Arabia in the largest single batch of wanted notices ever sent to police agencies worldwide.

Saudi authorities asked Interpol for help in locating the 83 Saudis and two Yemenis after releasing a new most-wanted list last week. Documents profiling the suspects show that they include a man married to Osama bin Laden's daughter and another who was suspected of involvement in a plot to kill the U.S. ambassador in Yemen.

Interpol, based in Lyon, France, said the men are all wanted on terrorism-related charges, including links to al Qaeda in Saudi Arabia, Iraq and Afghanistan.

It was the first time the international police agency has issued a single so-called orange notice for so many suspects at once. An orange notice is sent to all of Interpol's 187 member countries and includes identifying details of each suspect to aid in arrests.

Interpol did not release details about the suspects.

Documents profiling the men obtained by The Associated Press in Saudi Arabia show that many are suspected of taking part in planning attacks targeting oil or security installations or provided al Qaeda members with weapons and money. All are believed to be hiding abroad, many in neighboring Yemen.

Saudi authorities believe the men are active members of al Qaeda or local offshoots and are trying to re-establish the terror network in Saudi Arabia after a series of harsh crackdowns in past years. They include 11 who have been released from the U.S. prison at Guantanamo Bay.

Al Qaeda has not carried out a major attack in Saudi Arabia since February 2006, when suicide bombers tried but failed to attack an oil facility at the Abqaiq complex, the world's largest oil processing facility, in eastern Saudi Arabia.

Interpol Secretary-General Ronald K. Noble said Saudi authorities consider the men "a security concern not only for Saudi Arabia and the entire region but for the world as a whole."

Interpol lists more than 13,000 suspected terrorists in its databases.