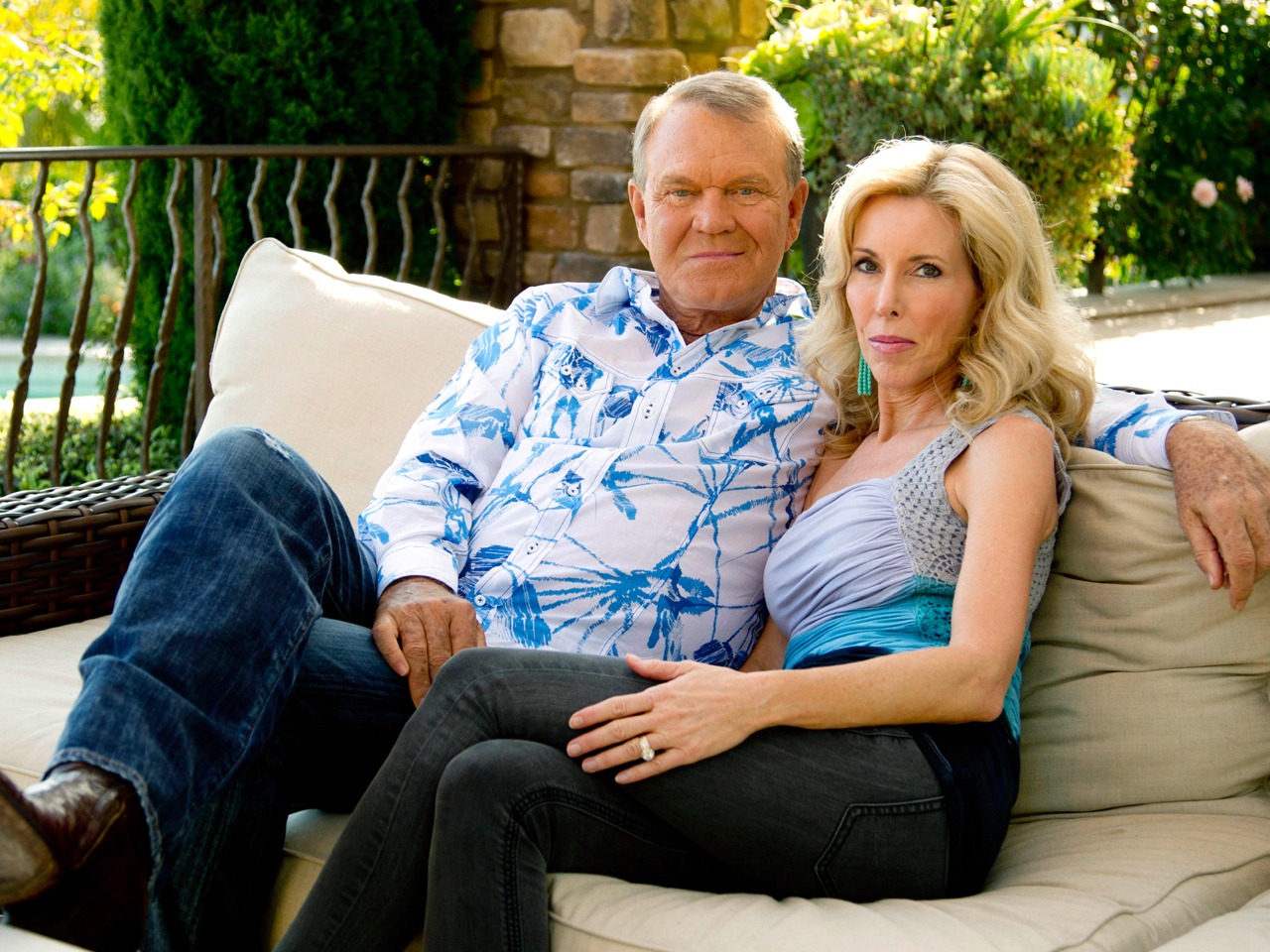 (CBS/AP) Glen Campbell is suffering from Alzheimer's, but helping him through it is family, friends and music. In fact, he's having a great time.

Make no mistake, it is tragic that Alzheimer's disease is slowly stripping away the memories and abilities that define one of music's greats. But day-to-day, surrounded by his family and friends, encouraged to play his guitar and sing and golf and joke, the 75-year-old Campbell is often smiling.

"I'm really not worried about anything," Campbell said. "You know those people who say, `Oh, geez, I wonder what's going to happen tomorrow?' Tomorrow's cool. Just don't mess it up. It's just wonderful. I think where I am at right now in this universe, I wouldn't want to be anything else than what I am."

Call it The Zen of Glen and it's been reached through the hard work of his wife, Kim, his children and business associates who are often as close as family. They've created a carefully engineered environment meant to shelter and encourage Campbell at every turn, whether he's at home or on the road.

The Campbell family allowed The Associated Press a glance at the Country Music Hall of Fame member's life during a recent visit to Biloxi, Miss., where Campbell played his first show last month since announcing he has Alzheimer's, a degenerative brain disease that so far has proven incurable.

That show was a dry run in preparation for a string of dates this summer and fall overseas, and for a goodbye tour next year in support of his last studio album, "Ghost on the Canvas," out next Tuesday.

"What's really fun is it's not like work now because I've got my kids here, and my wife here, and they're all playing," Campbell said.

There are indeed moments of confusion, memories that refuse to coalesce and words for simple things that remain just out of reach. But for the most part, Campbell doesn't realize he has Alzheimer's. He's untroubled by the gravity of it all.

Gently reminded of the diagnosis he says, "It hasn't come by yet."

"You get a little forgetful," Kim says.

"Well, it may look like that, but I don't want to hear it sometimes. That's an old trick."

And everyone laughs. Out of sadness, a smile.

"We call it part-timers," Kim said. "You just never know. Some days are great, and some days he maybe repeats himself a little. On stage a couple of times he might forget what key a song is in, which 20 years ago might never happen."

It started with simple forgetfulness about 10 years ago. Early on, doctors gave less dire diagnoses. As it advanced, there was confusion and anxiety: The family wonders if the disease contributed to a short return to drinking that resulted in a drunken driving arrest in 2003.

Recently California took away his driver's license. Kim avoided telling him as long as possible, finding excuses to drive them everywhere they go.

She's afraid he's slipping from the early stage to the middle stage of the disease, and there's no predicting how long he'll be able to perform. The album and tour dates are the family's way of helping him stay anchored in the present.

"I do get nervous about his ability to stay on track and read his teleprompter and remember his chords," Kim said. "So far everything's been pretty good. Eventually I expect if this progresses as it normally does, we'll start to have problems. So we're preparing to get him off the road and retire, but we wanted to go out with a bang. He wants to do it as long as he can, but the scary thing is you don't know when the shoe's going to drop. We're all worried that if we stop, he'll get worse more quickly."

The power music has to preserve what Campbell has left is on display any time he picks up a guitar. His fingers appear to have forgotten nothing and still float over the strings.

"I can't imagine what that guy must've been like at 25 because at 75 and in this condition he's frightening," said Julian Raymond, producer of "Ghost." "He's really very good. He's blessed in that sense."

Always has been. What Campbell lacked in formal training or perhaps because of what he lacked he made up for with feel and his ear and a preternatural sense of what fit where.

As a young man coming west out of Arkansas, he was enchanted by the sounds of jazz and country and rock and the true melting pot that American music was in the 1950s and 1960s. At 16, he took an uncle's invitation to join his band in Albuquerque, N.M., and play on a radio show. He eventually migrated to Los Angeles.

"I didn't go to Nashville because Nashville at that time seemed one-dimensional to me," Campbell said. "I'm a jazzer. I just love to get the guitar and play the hell out of it if I can."

Despite being unable to read music, he joined a crack team of session players known as The Wrecking Crew. They recorded iconic songs like The Byrds' "Mr. Tambourine Man," and Simon and Garfunkel's "Bridge Over Troubled Water," "The Monkees" and "The Age of Aquarius" while helping Phil Spector develop his game-changing wall of sound approach.

"We'd get the rock `n' roll guys and play all that, then we'd get (Frank) Sinatra and Dean Martin," Campbell said. "That was a kick. I really enjoyed that. I didn't want to go nowhere. I was making more money than I ever made just doing studio work."

He was a member of The Beach Boys for a time during this period and never knew who might show up in the studio during his day job. One of those sessions was with The Smothers Brothers, which landed him on television. He was overseas when his first episode aired and was amazed to find everyone seemed to know who he was when he returned stateside.

"The whole lid just blew off," Campbell said. "I had never had anything like that happen to me. I got more phone calls. It was awesome. For the first couple of days I was like how do they know me? I didn't realize the power of television."

Not long after Campbell launched one of music's most successful runs. He was a true crossover star whose music appealed to both pop and country fans. He employed the ear and opinions he'd honed over the years in the studio to put his own spin on instant classics like "Wichita Lineman," "Rhinestone Cowboy," "Gentle on My Mind," "Galveston," "By the Time I Get to Phoenix" and "Southern Nights."

Raymond said many of the hallmarks that made Campbell such a great performer then remain today. He first met Campbell in 2007 when they worked on "Meet Glen Campbell" together. The two became friends and Raymond began keeping notes, writing down snatches of conversations he had with Campbell as he discussed his feelings and his family.

Raymond crafted those fragments into deeply personal songs that address both his health and his feelings for his wife and family. The album also features songs from singer-songwriters as diverse as Paul Westerberg, Jakob Dylan and Robert Pollard, but with the Campbell touch foremost in mind.

"We'd compare notes and talk about what he wanted to say and what he didn't want to say," Raymond said. "And then he'd do this classic Glen Campbell stuff where he wants the tempo sped up a bit and to find the right keys. It was a collaborative affair as far as that goes. He's always been very, very good in the studio and that didn't change in the last few years of doing this."

What emerges is an ultimately optimistic album, full of love and a sense of peace. Campbell is learning to play the songs for his live shows, actively battling Alzheimer's by making and retaining new memories, forcing his brain to not only remember but also to help him excel.

It's a dramatic change for Campbell. He was ready to give up life on the road a few years ago, said Bill Maclay, Campbell's tour manager for 33 years.

"Glen was not a happy camper out on the road," Maclay said. "He told everybody, `I'm going to quit. I don't want to do this.' I asked Kim to come out on the road and that really helped. And once we brought his family out, the road is his home now. He sees his family here more than at home."

There is something of a circus atmosphere around Campbell's entourage, constant jokes and banter, the sounds of lives being lived. Fans invited to a meet and greet find Campbell in 100-watt mode, cracking jokes and showing few signs he's anything but the Glen of old. But there are little reminders that occasionally catch up with everyone.

"We were watching one of his videos from `The Goodtime Hour' and some live shows in the `70s and he was so on top of things," said Ashley, 24. "And it's sad to know that he could still be that good if he didn't have Alzheimer's. It's stealing his powers away."

But those sad moments are quickly chased away, said her 26-year-old brother Shannon. Everyone chooses to follow The Zen of Glen.

"There are a lot of new treatments he's trying out," he said. "Nobody's ever been cured before, but people are pretty hopeful about these treatments he's been trying. We're just keeping our fingers crossed."