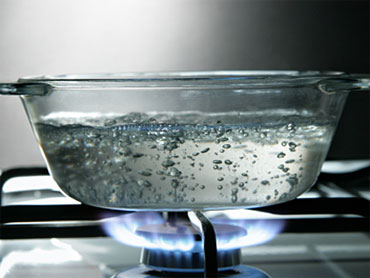 Plenty of people will be busy cooking this holiday season. But there could be a hidden danger lurking in your kitchen.

She reports that, if it's not used properly, glass bakeware can suddenly shatter -- and in some cases send glass flying through your kitchen.

Consumer Reports put some of the top names to the test -- and is asking the federal government to investigate the problem.

Koeppen points out that glass bakeware is a staple American kitchens -- but cooking with glassware can lead to explosions.

While hundreds of millions of glass dishes are used safely each year, the Consumer Product Safety Commission says that, from 1998 to 2007, almost 12,000 people went to emergency rooms for treatment of injuries from glass bakeware that was dropped and broken or shattered during use. Consumer Reports says shattering bakeware may be less common, but it poses a greater threat to consumers since it may break without warning.

Don Mays, senior director of product safety planning and technical administration at Consumer Reports, told Koeppen, "We wanted to investigate this because the number of complaints seemed to have increased lately."

For its January issue, Consumer Reports decided to test dishes from the two big names in glass bakeware, Pyrex and Anchor Hocking.

Dishes were put through extreme conditions. In one test, they were baked in the oven on high heat, and placed on a wet countertop, something that is not recommended when using glassware.

Mays said, "We were surprised by the forcefulness with which this glass broke."

Consumer Reports blames the problem on the type of glass now being used to make these products in the U.S.

Mays said, "We believe that the glass bakeware that's on the market today is different from what we used many years ago. And it probably has more propensity to shatter unexpectedly."

Pyrex says it's used the same glass for the past 60 years, but its dishes do come with a list of warnings found on the back of the label, such as, "Failure to follow the warnings below may result in personal injury or property damage, or may cause your glassware to break or shatter immediately or later."

Both Pyrex and Anchor Hocking say their bakeware is safe and has been used safely for generations. The Consumer Product Safety Commission is looking into the Consumer Reports story, Koeppen said.

What should you know when you're using glass bakeware?

Koeppen discussed some do's and don'ts:

• DO NOT add liquid.
• DO NOT place on a wet or cool surface, (like a countertop or sink)
• DO NOT handle with wet cloth.
• DO NOT use under a broiler.
• DO avoid sudden temperature changes to glassware.
• DO allow your oven to pre-heat before using glassware.
• DO always let your glassware cool off on something like a cooling rack or a dry dish towel or pot holder.
• DO cool down the dish before washing, refrigerating or freezing.
• DO read your glassware's label.