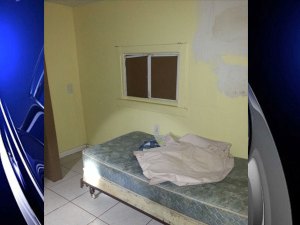 56-year-old Gladys Jaramillo, of Sweetwater, Fla.,. is facing charges of aggravated abuse and neglect of a mentally disabled adult and false imprisonment, reports the station. Police said the room had iron bars and a dead bolt on the door, and photos taken by investigators obtained by CBS Miami show a bare mattress against a wall and what appeared to be traces of human waste on the floor, reports the station.

The windows in the room were blacked out, according to the station.

Jaramillo admitted to locking up her son so she could go out with her boyfriend and giving him sedatives so he would sleep while she was away, an arrest affidavit alleges.

"It's very much like a dungeon. The first thing that comes to mind if you saw the room is dungeon," Sweetwater police spokeswoman Michelle Hammontree said, reports the station. "There was a strong smell of urine and feces. Straight from the living room, you could smell it."

A neighbor reportedly said the man would sometimes run out of the house in diapers looking for food.

The Department of Children and Family Services is investigating. A representative reportedly said DCF has had previous history with the family, but wouldn't elaborate.