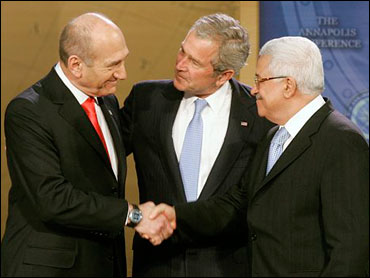 In July of 2000, about six months before his term in office was to end, he announced a final push to work out an Israeli-Palestinian peace agreement by inviting Prime Minister Ehud Barak and Pres. Yasser Arafat to negotiations at Camp David.

Back then, Mr. Clinton called it "a moment in history which they can seize." In Annapolis today, Mr. Bush said we faced "an historic opportunity."

Mr. Clinton spent two weeks at Camp David with Barak and Arafat – but no agreement could be reached. The same issues that stymied the talks then, still remain to be resolved now. And that's why the presidential rhetoric then and now is so similar:

CLINTON (7/5/00): "There are no easy answers and certainly no painless ones."
BUSH (Today): "Achieving this goal is not going to be easy -- if it were easy, it would have happened a long time ago."

CLINTON (7/11/00): "We have an opportunity to bring about a just and enduring end to the Israeli-Palestinian conflict."
BUSH (Today): "We meet to help bring an end to the violence that has been the true enemy of the aspirations of both the Israelis and Palestinians."

CLINTON (7/11/00): "The two leaders face profound and wrenching questions and there can be no success without principled compromise."
BUSH (Today): "To achieve freedom and peace, both Israelis and Palestinians will have to make tough choices."

CLINTON (7/5/00): "The rest of the world, and especially the rest of the region, cannot afford to be bystanders."
BUSH (Today): "For the rest of us, our job is to encourage the parties in this effort -- and to give them the support they need to succeed."

CLINTON (7/11/00): "I'll do everything I can over the coming days to see that this moment of promise is fulfilled."
BUSH (Today): "I pledge to devote my effort during my time as President to do all I can to help you achieve this ambitious goal."

What all this means is that the issues President Clinton tried to get Israel and the Palestinians to resolve in July of 2000, remain on the table now - and have not gotten any easier.

In fact, Mr. Clinton acknowledged that if his peace talks failed, which they did, the same issues would have to be taken up by future leaders.

"Eventually, after more bloodshed and tears, they will have to come back to the negotiating table," he said.

That's what Olmert and Abbas have now agreed to do at President Bush's urging.