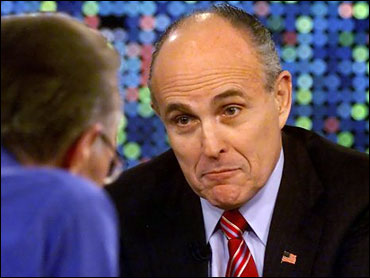 "Yes, I'm running," Giuliani said Wednesday night on Larry King's show on CNN. When King asked the GOP presidential hopeful whether he will make a formal announcement, Giuliani said "I guess you do."

In a related development, the GOP presidential hopeful will stop accepting invitations to give paid speeches that reportedly net him $100,000 an appearance, his campaign said Wednesday — the same day he was in San Diego to speak at a motivational seminar.

The campaign did say the former New York City mayor is evaluating how to handle previous commitments, leaving open the possibility he will follow through with speeches already on his calendar and might accept payment for them. The campaign also will seek guidance from the Federal Election Commission.

"His top priority is traveling around the country talking to voters about his vision for the future of the country, and he is committing the time and energy necessary to getting his message out across the country," said Katie Levinson, a campaign spokeswoman.

In the years since he left office, Giuliani has earned millions through his consulting firm, other business interests and his high-priced speaking appearances in the U.S. and elsewhere. But his business ties have come under scrutiny in recent weeks as Giuliani has made clear he was serious about running for president, recently declaring, "I'm in this to win."

Given his campaign and potential conflicts of interest, Giuliani has started to divest himself from some business dealings. The move to cease his involvement on the lucrative speaking circuit is yet another indication of his strong desire to challenge top rivals Sen. John McCain of Arizona and Mitt Romney, the former Massachusetts governor, for the GOP presidential nomination. The three are considered the top tier of a crowded Republican field.

There is no prohibition against a presidential candidate's accepting money for such speeches. But doing so would give Giuliani's opponents fodder for criticism. Such speeches also would cut into time that Giuliani could spend campaigning in early presidential primary states.

After a four-day campaign swing through California, Giuliani was booked to speak to aspiring entrepreneurs in San Diego for an event sponsored by "Get Motivated Seminars." Giuliani has been affiliated with the traveling series of paid seminars since February 2003.

A campaign aide said Giuliani has not received any money for that speech, the first such event in the few weeks since the former mayor made clear that he was sincere about running for president and took more concrete steps to get in the race.

Since he left City Hall after two terms, Giuliani — the author of a best-selling book called "Leadership" — has traveled the country giving speeches that focus on principles of leadership and his experiences as the head of a major city, including his widely praised performance after the Sept. 11 attacks.

News reports have indicated that he commands $100,000 for each speech, excluding expenses. The reports say like other big-time speakers, he routinely requests to travel in private jets and his contracts include other amenities.