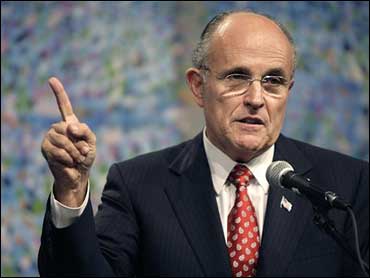 Is Rudy Giuliani the political reincarnation of Richard Nixon? That was the argument former Bush speechwriter Michael Gerson made in a Washington Post column last week.

Leave aside the obvious facts that Nixon's presidency ended in disgrace more than 30 years ago, that times, societies, and politics change, and that different politicians capture the imagination of different constituencies in different ways. And leave aside the fact that Gerson incorrectly says Giuliani supports the "waterboarding" interrogation technique, even though Giuliani has said repeatedly since June that he does not think waterboarding is necessary in "aggressive" interrogations. In his column, Gerson offers three arguments for why Giuliani more closely resembles Nixon than the former New York City mayor's self-described hero and former boss, Ronald Reagan. The arguments don't add up.

The first is that Nixon was "a talented man without an ideological compass," and Gerson thinks Giuliani shows signs of being the same. The only evidence for this that Gerson offers is Giuliani's endorsement of Democrat Mario Cuomo over George Pataki in the 1994 New York gubernatorial race. But Giuliani's (wrongheaded) decision had more to do with his longstanding rivalry with Pataki and Pataki's patron, former New York senator Alfonse D'Amato, than ideology.

Though he doesn't mention it, that rivalry actually lends a little credence to Gerson's second argument, which is that "Giuliani's combativeness, on occasion, blurs into pettiness." But Gerson backs this assertion with no evidence, so one has to assume he doesn't take it too seriously.

That leaves Gerson's third argument. He says a Giuliani primary victory would "place the Republican nominee in direct conflict with the Roman Catholic Church." This is because Giuliani's positions on abortion, stem cell research, and the death penalty are the "exact opposite of Catholic teaching." That may be true, but it is not an argument for why Giuliani resembles Nixon, a Quaker. It's an argument for social and religious conservatives, Catholics in particular, to oppose Giuliani. It's also worth remembering that the Catholic Church ignores the departures from its teaching of Ted Kennedy and any number of Democrats far to the left of Giuliani on these issues.

In fact, on almost any issue, the differences between Giuliani and Nixon are profound. Start with domestic policy. Nixon presided over a large government expansion, creating new federal departments like the Environmental Protection Agency. Giuliani says that he would cut government, shrinking the federal workforce by 20 percent by not replacing retiring employees, requiring mandatory 5 to 20 percent budget cuts in all departments annually, and ending the practice of anonymous congressional earmarks. Nixon also instituted the first racial preferences program for government contracting. Giuliani was the first GOP candidate to release a statement praising the Supreme Court's recent anti-preferences ruling.

Nixon authored massive federal interventions with an eye toward short-term political gain. Regulations spewed forth from the Nixon administration, most famously his arbitrary reduction of highway speed limits to 55 miles per hour. He took the U.S. dollar off the gold standard, devaluing the currency and laying the foundation for subsequent inflation. He raised taxes. He imposed wage and price controls. He was willing to impose tariffs and duties to guarantee his reelection.

If you read Giuliani's many position papers or listen to him on the stump, you see that his economic program is pretty much in a separate galaxy from Nixon's. Giuliani would maintain the Bush tax cuts and seek to reduce the tax burden even further. He says he would work to reinstate presidential "fast track" trade authority, which allows the president to negotiate trade agreements directly with foreign governments and submit them to Congress for an up-or-down vote. He would sever the link between employment and health insurance by creating a $15,000 tax deduction for insurance and increasing the utility and availability of health savings accounts. Whatever this is, it is not the Supplemental Security Income program.

On foreign policy, Nixon and his national security adviser Henry Kissinger devised the policy of détente, by which the United States accepted the Soviet Union as a status quo power and abandoned attempts at Communist rollback. The most vociferous critics of détente were those conservatives, neoconservatives like Norman Podhoretz especially, who argued that Nixon and Kissinger ignored the Soviet empire's true aims as a revolutionary expansionist power and that a more aggressive U.S. stance was necessary to oppose it. Recently the Giuliani campaign announced its foreign policy team. Norman Podhoretz is a senior adviser.

In his column, Gerson mentions that Nixon appointed Justice Harry Blackmun, the author of Roe v. Wade, to the Supreme Court. Blackmun found a right to abortion in the Fourteenth Amendment — a "loose" interpretation of the constitutional text, to put it charitably. Last week Giuliani went to Iowa to discuss his "Ninth Commitment to the American People," part of which is appointing "strict constructionist judges" to the bench. Giuliani told reporters that his model Supreme Court nominees are John Roberts, Samuel Alito, Antonin Scalia, and Clarence Thomas. Over the years all four have voiced concern over, or outright opposition to, the Court's abortion jurisprudence. Last week Giuliani also announced his "Justice Advisory Committee." During the Bush presidency, four members of Giuliani's committee — Ted Olson, Larry Thompson, Miguel Estrada, and Maureen Mahoney — have been mentioned as possible future Court nominees.

In his pursuit of power, Richard Nixon would often pander. "Pander" is not a word people typically associate with Rudolph Giuliani. Indeed, at a restaurant in Le Mars, Iowa, last week, I heard Giuliani tell an audience member that while he believes in God and prays, "I don't know if I conform completely to the teachings of any particular faith," and that "I'm probably more a student of religion than a practitioner of religion." The audience listened quietly, then laughed when Giuliani added, "I pray like a lawyer — I try to make a deal." Has there ever been a Republican presidential candidate more frank about his, shall we say, complicated religiosity?

It is clear that Giuliani's pro-choice views on abortion trouble Gerson more than anything else. And he is right that those Americans who have "been persuaded over the years to support Republicans mainly on the pro-life issue" may turn out to be "less impressed by a conservatism purged of pro-life moralism." (How they would react to a conservatism infused with Giuliani's moralism is unclear.)

No one knows what single-issue pro-life voters might do should Giuliani become the Republican nominee. Nor does anyone know who might replace them in the Republican coalition if they left. It's clear, though, that if Giuliani turns out to be the nominee, it will be despite, not because of, his consistent — since 1989 — stance on Roe. But this would not mean that Giuliani is the next Nixon. It would mean only that he is one of a kind.